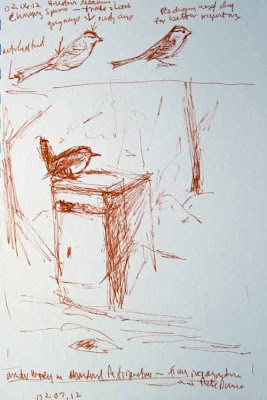 After a few hour out birding and sketching on a winter day it's always nice to come home and settle down with a book about the birds seen. Because it's not a picture book I often forget about Pete Dunne's 'Essential Field Guide Companion.' But when I remember to pull it out it's always a pleasure to read.

Birds I wanted to look up that we'd seen today were Belted Kingfisher and Red-headed Woodpecker. But we'd also headed out to the Wissahickon today specifically hoping to see a Winter Wren. We found one a few weeks ago quite close to the tree where the Red-headed Woodpecker has been hanging out for months. But no luck today. Jerene caught a glimpse of a small wren but we never saw it again. Most likely it was a Winter Wren. But I really wanted to sketch it and a brief glimpse by someone else just wasn't enough material to work with. In any case I also read the entry on Winter Wrens.

If you've ever read this book you know that you always need to pay attention. If you don't some clever thing is going to slip right by you. Today I was reading about a 'feathered mouse', which seemed factually accurate, which hops from "brush pile to uprooted tree stump to discarded refrigerator..." You can guess the part that's easy to miss. And yet it strikes you as true. It's not unreasonable to expect a discarded refrigerator along a stream where a Winter Wren might hop along like a mouse.

I'm not an artist who can work well from imagination. My wife, who claims NOT to be an artist, can draw a bird from her imagination better than I can. But all my field sketching is making me a bit better. I've got a much better mental image of birds than I did five or six years ago. In my field sketches I often now spend most of my time looking at birds then try to draw them from a briefly held mental image. I'm getting better at mental images of birds. Not that I don't still come up with some whopping mistakes.

In any case as I sat enjoying my coffee and reading about the Winter Wren hopping to the discarded refrigerator I couldn't resist trying an illustration of such from my imagination. It's at top.

I sometimes think that the best way to do field sketches of fast-moving birds is to have a mental image at the ready, get that down on paper quickly and then spend the real work trying to delineate the specifics of the bird just seen. So even though we didn't see a Winter Wren today I had some semblance of a mental image. So that's how this came about. It's partly for fun but I imagine will also help me to do a better field sketch the next time I actually see a Winter Wren.

Above it on the same page are two sketches of Chipping Sparrows. The one on the left is one that we saw at Houston Meadows in Philadelphia on Sunday. As with so many of my passerine field sketches I've elongated the torso. So the sketch at right is a mental image sketch based partially on the sketch at left but also on what I recall that I saw in my field guides and in actuality on Sunday. It seems like another worthwhile type of exercise. 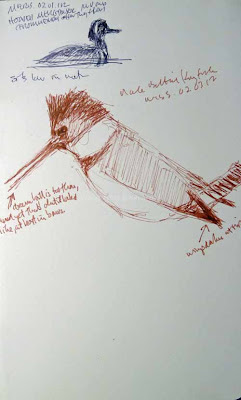 Above a small field sketch of a male Hooded Merganser seen very briefly at Morris Arboretum about a week ago. Everything I've read says that you should only put down on paper what you actually recall seeing when you do a field sketch. Often that looks incomplete so there's a real temptation to embellish. I did that here and really shouldn't have. I remembered black markings on the breast but not exactly where they were. My guesses were a bit off.

Below him is a male Belted Kingfisher from today. There is a small bit of embellishment here but most of the sketch is from life. The odd thing is that the bill, seen at quite a distance through binoculars, really did look that thin. I have other field sketches where it looks more like the blunt shape it really is. Still I stayed true to what I saw. 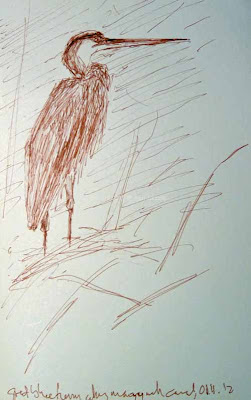 Finally a Great Blue Heron seen along the Manayunk Canal almost a month ago. I've also made his bill a bit too thin and long. Perhaps I'm just out of practice with bills. There's only one answer: more practice!

This has been a bit of a ramble. But I did want to write some of my thoughts about field sketching. It's very difficult. And yet incredibly enjoyable. And it's these sketches from life that often lead to the best more finished art.
Posted by Ken Januski at 6:30 PM