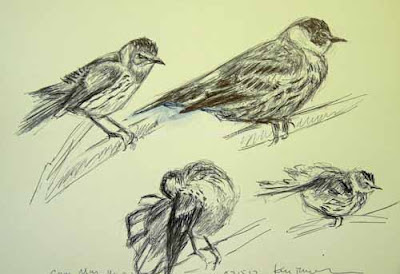 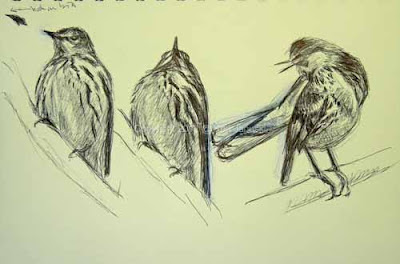 Our trip to the Biggest Week in American Birding at Magee Marsh in Ohio last spring was memorable in many ways. At the top of the list though was the number of migrating wood warblers in full breeding plumage that seemed to be everywhere.

I did stick to my plan and try to do as much field sketching as possible. This is always difficult when you know you probably won't get such good looks at some of these birds again for many years. Wouldn't it be better to just take photos? Well that certainly was a temptation but I'm proud of myself for sticking with my plan and doing numerous field sketches. I also took photos but I concentrated on sketching.

But winter always seems to be the time for me to look through the photos that I have taken and do some drawings based on them. So I'm making use of some of the photos I took at Magee of Cape May Warblers here.

The sketches above are based on those photos. In many of them a Cape May Warbler had just bathed in the stream in front of us and had hopped back up to preen and rearrange his feathers. Most of the photos show him in motion and I've also tried to portray that in some of the sketches. It's all part of what birds actually look like.

If you've ever seen a Cape May Warbler in breeding plumage you might wonder how I can stand to portray it in black and white. I love its color though my wife thinks that they're over the top. I'm sure I'll get to something in color eventually but for now I'm concentrating on structure. I can already see on mistake I've made in that in these drawings. 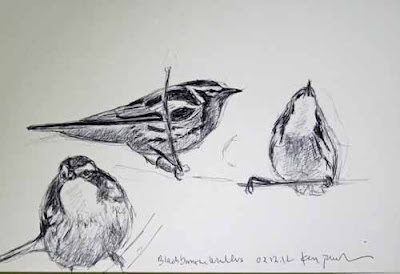 We also got some very good looks at numerous Blackburnian Warblers. I did do a multi-color reduction linocut based on them as well as a couple of watercolor sketches. But it's always good to study their structure again. These sketches are based on Magee photos as well as some from Shenandoah National Park. 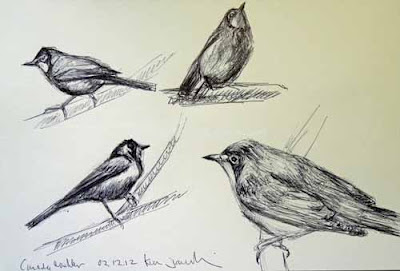 And speaking of Shenandoah National Park above are some sketches of Canada Warblers based on photos I've taken there over the years. Some of my very first bird drawings when I took up birds as subject about six years ago were these same Canadas. That was when I first realized how deceptive photos can be and how hard it is to make sense of an unclear area in a photo if you don't really understand the structure of the subject. Thankfully I've learned a bit more about structure during the last six years. Not that there's not still a long, long way to go.
Posted by Ken Januski at 11:58 AM

Ken,
I can't remember when NatureBlog Network picked up your blog, but I've been following it ever since. I hope you recognize that your field sketches have improved leaps and bounds in the past year!!! I keep exclaiming, "Oh, Wow!" This is a great set. I like the washy ball point pen ones a lot.
Yours,
Nanina

Happy to hear that you've been following the blog so long. I do think my field sketches have improved but they still leave a lot to be desired. So that's why I sometimes do these studies from photos. Hopefully they'll have some small effect on me when I next see warblers in real life.

Oddly enough though they shouldn't be here for a couple of months I think that about six warbler species were found on the Philadephia Mid-Winter Bird Census about a month ago. So at least a few are around even now. I hoped to maybe spot a Yellow-rump or Orange-crowned while out today but no such luck. Of course I knew it was VERY unlikely.

I'm partial to those runny ink ones too. But they don't allow as much exactness as these so for a bit longer I'll continue like this. I'm sure I'll be yearning for something less precise soon enough though!