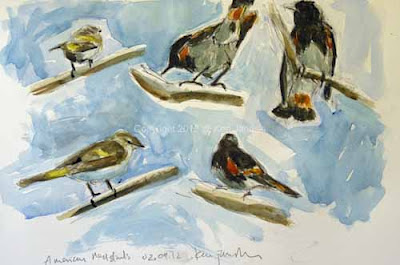 I was looking through my sketchbooks yesterday looking for a new subject, most likely for a linocut but possibly for something else. Every time I came across a field sketch of a wood warbler I thought, 'Boy, do they leave a lot to be desired!'

As much as I enjoy doing field sketches, and I really do, I sometimes can be disappointed in their quality. One solution I sometimes try is sketching from photos of the problem bird or species, hoping that I'll learn something in doing so. I'm not sure that this works. If it does it's much more indirect than you might expect. Rather than learning the structure of the bird while wokring from a photo it always seems more likely that I try to copy the patterns of dark and light that I see in the photo. Structure retreats to second place. To me that is what is always so tricky about using photos, and why I generally don't like to do so.

I'd also written recently about the difficulty of knowing what to do when you run into a murky area on a photo of a bird you don't know well. What is the structure beneath the murk? Is an area part of the primary feathers, the rump, the tail? What do you do when an obstruction crosses the middle of the photo? If you know the structure well enough you can either just remove it or paint it without breaking the continuity of the bird. But if you don't know the structure you can end up with a mess. Often I avoid using this type of photo.

So after looking through my sketchbooks yesterday I also looked through some photos. Some of the first I found were of American Redstarts, a beautiful wood warbler. And yet I've never worked from these photos. Why? Because not only were the photos murky the bird itself is murky. The male is a brilliant orange, black and white, with the female replacing the black with brown and the orange with yellow. It's the male that's the problem. When you look at it you mainly see a dark blob with some orange splashes of color. It is very difficult to see the structure of the bird, to even pick out the eye on the black face. So I had murky photos of a murky bird.

No wonder I'd never done any work from these photos. And the photos were taken over numerous times and places. It's just that wood warblers rarely sit still long enough for photos, or particularly for field sketches.

For the first time though I thought I might be familiar enough with the structure of birds and wood warblers in particular to try sketching them, confident that i would know what to do when I reached a murky area in the photo. So that's what you see above. I probably spent two hours or more on these small sketches.

Once I felt that I'd sketched the structure of the birds to the best of my ability I added watercolor. That was another problem. How do you show the structure on a bird that sometimes seems like a black blob? In fact portraying any black bird is difficult. It's easy to have it look flat. It's a far cry from the light breast and clear brown markings of a Song Sparrow. They lend themselves to volume. Black birds lend themselves to flatness.

These are not my best watercolor sketches by far. They're not very fresh looking and they lack detail. But for me anyway they show that it is possible to use murky sources if you have some familiarity with the underlying subject. I doubt I ever would have tried anything from these bad photos if I hadn't spent a lot of time doing field sketches of other birds, especially the elusive wood warblers.

It would be thrilling if this spring was the first time I did some field sketches of wood warblers that I really liked. We'll see. It's still a few months away.
Posted by Ken Januski at 4:52 PM