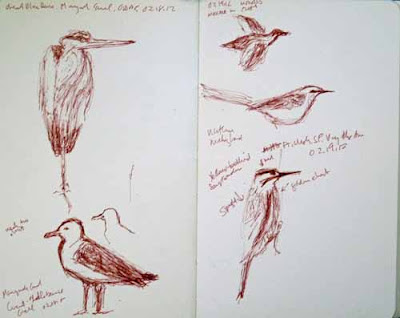 I managed to get out for a couple of hours yesterday for GBBC and then today we were out for about three hours at two locations. We didn't find any rarities though the Yellow-bellied Sapsucker from today was bird number 50 for the year and our first Yellow-bellied Sapsucker of 2012. We may also have seen our first American Black Ducks of the year. But I can't say for sure. I'm just not that familiar with them. I include a couple of photos at bottom.

As I've mentioned there's always a decision to be made if I see a bird and have both sketchbook and camera. Which shall I use? I don't have any good photos of Yellow-bellied Sapsuckers though I do have numerous bad ones. Today's was particularly close to us just off the pedestrian bridge at the Flourtown Day Use Area of Fort Washington State Park near Philadelphia. But I stuck to my guns and spent my brief time trying to sketch it. If I'd had my camera unpacked from its carrying back and ready to shoot I might have tried it. But I'm glad I didn't. I always learn more from sketching.

In this case one of the things I learned is that the bill is longer than I'd ever noticed, though a bit shorter than in my sketch. I also noticed the black line coming off the bill and onto the face. Unfortunately I didn't notice how it makes a turn and goes back into the throat, nor that the black line through the eye is at a 45 degree angle to the forehead not perpendicular. These are the types of things that I generally learn when I field sketch. I put down what I recall seeing and then later compare it to reference photos and field guides.

It's much easier to do this if I have a scope and can keep a constant eye on the bird while I sketch. I don't need one hand holding up the scope. But with binoculars I need to hold them up to my eyes with two hands, try to get a detail or impression, then put them back down and use my hands to hold sketchbook and pen or pencil. It's this back and forth that leads to errors.

The other option is to just keep your eye on the bird, even with binoculars and only try to sketch if after it's left. That's what I did with the Mallard in flight and the Northern Mockingbird above. It's also a useful method and sometimes works out well. With it also I later go back and compare what I've put down to photos and guidebooks.

The Sapsucker, Mockingbird and Mallard are all from today. Yesterday I saw a Great Blue Heron and my first Great Black-backed Gull of 2012 at the Manayunk Canal. Both stayed put for quite a while though the heron longer than the gull. I was able to spend at least 10 minutes on the heron. I've done so many of them now that I'm starting to get comfortable. Gulls are another story. Even though some of them, like Ring-billed, are common they're never common where I bird. So I don't have much practice with them. Sadly that shows in this sketch of the Great Black-backed Gull.

But any mistakes are active mistakes, done when I'm actively engaged with looking at the bird. They are far more educational than those made while using a photo.

In any case I always enjoy taking part in the Great Backyard Bird Count. This year I've enjoyed it even more by also doing field sketches. One more day left tomorrow so we'll see what that brings. 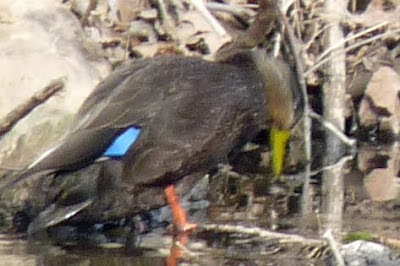 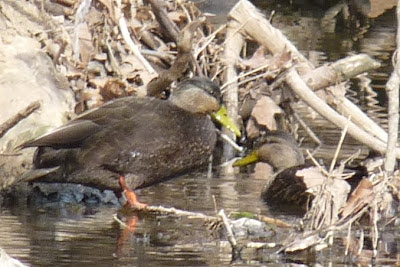 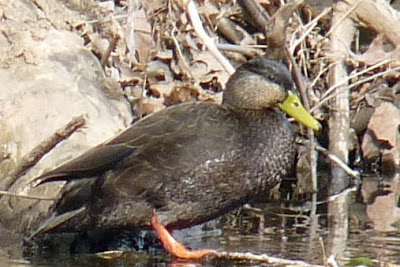 Above the ducks that MIGHT be American Black Ducks. This was an instance where it seemed worthwhile to unpack the camera and take a couple of shots.
Posted by Ken Januski at 5:44 PM