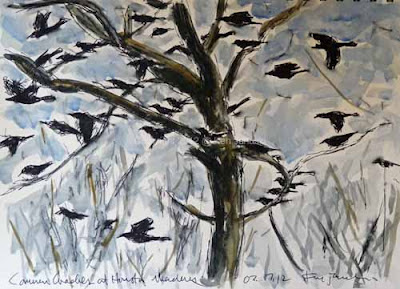 For quite a few years now we've tried to take part as much as we could in The Great Backyard Bird Count. This year was no exception and today we spent over three hours at Houston Meadows in the northwest section of Fairmount Park and the Wissahickon Valley. The count continues through Monday.

Before we even got out of the car we saw HUGE flocks of birds. We tried to hurry to get out and grab our binoculars from the back of the car before they scattered. We didn't quite make it in time. Part of the flock though, 100+ American Robins, stuck around and were easy to identify.

The cacophony of the departing and much larger flock made us both think Common Grackle but we weren't sure. Red-winged Blackbirds can also be loud and we're not used to seeing them in flocks. Later in the day though as we neared Bells Mills Road we got a good look at either the same flock or an equally large one. They were definitely grackles, so many as to almost blacken they sky when they flew.

At top is one of my runny ink and watercolor versions of the scene. It's quick and sloppy, based on some photos that I took. But I think it gives some sense of the scene. And of course with grackles there's a sort of metallic cacophony that accompanies the visual display. It was a great way to see our first Common Grackles of 2012.

Other highlights were a Hairy Woodpecker, numerous Eastern Bluebirds and Chipping Sparrows along with 21 other species, and some blooming snowdrops. One reason that we've always enjoyed this bird count as well as the other winter bird counts that we take part in is that we always find something new. Nature is always changing.

And though it may not seem like spring nature always shows some hints of the season that is on its way, ready to displace the current one. Huge flocks of Common Grackles are a sign of northward migration. Migration is starting. Soon spring will be here.

I have also done some new ink studies of warblers but I'm going to hold off on showing them for a bit. Hopefully there will be more to show from the next three days of the count.
Posted by Ken Januski at 5:01 PM

Hi Ken, I like your grackle sketch even though you said it was quick and sloppy. It looks just like a flock of grackles taking flight! We had a flock of 40 robins in our neighborhood this morning. I'll keep an eye out for grackles and red wings. I hear the latter are around. It does feel like spring, but wonder if we won't still get walloped by a snowstorm in March when all we want to do then is start gardening! Ellen

I know what you mean about those late season storms, though I'm sure that they're more likely in NH than here. Still I've seen plenty of late February and early March snowstorms. Yesterday I was out for a few hours and it really felt like spring.

Your note about gardening reminds me that I need to inventory and order seeds soon. Last year I think our crops were particularly good because I got an early start on seed planting inside under lights.

I did plant some mache in a cold frame in November. That was supposed to be too late but they did germinate. Only the size of a dime right now but I'm hoping that they'll come along as weather gets warmer.