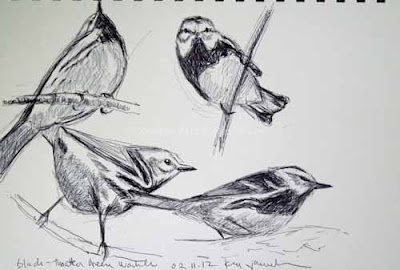 Continuing on with the thought of preparing myself for doing field sketches of wood warblers when they arrive for their brief spring visit I've returned to my photos of them and done some ballpoint pen studies. Above are some Black-throated Greens. Though the most striking thing about these warblers is their color you really can't do justice to that without being able to draw the structure of the bird. Many of these photos were taken at Magee Marsh in Ohio last year where warblers seemed to drip from the trees. 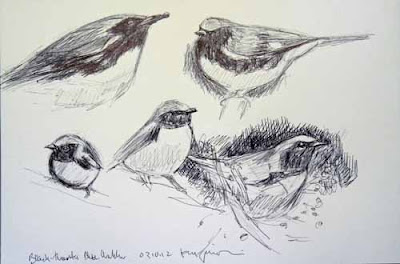 Above are Black-throated Blues. Though we saw many of them at Magee we also see very many here in Philadelphia, especially in the fall. These sketches are all based on photos I took in Philadelphia over the last couple of years.

The striking colors or warblers can almost hypnotize you. I always find that when I try to draw them in the field the thing that has stuck in my mind is a field mark, for example the black throat of either Black-throated warbler. But I don't remember the structure. In fact I don't even SEE it. I'm too struck by the colors and patterns, and of course the fact that the bird has now flown. In any case I hope that these studies might help a small bit in creating a mental imprint on my mind of their structure. 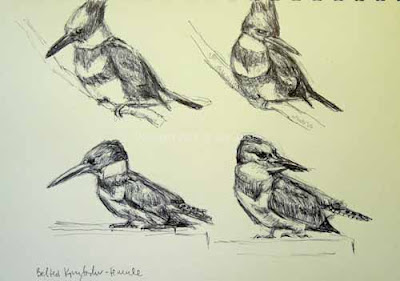 I do have a better mental image of a Belted Kingfisher. So when I drew one recently in the field with a very long thin bill I knew it was wrong. But that is what I saw so I stayed true to it. But it got me thinking so I did some ballpoint pen studies of them as well, all based on photos I've taken in Philadelphia over the last year or two. I've yet to figure out what made the bill seem so thin. But in looking at my old field sketches I found another similar sketch with a long thin bill. Perhaps it's because his mouth was open, perhaps eating something? I don't know. but something created the illusion of thinness. I'll need to keep investigating. (Well the investigation wasn't very time-consuming. After posting this I was looking through 'The Art of Robert Bateman.' I came across a painting, which I'd seen many times before, called 'Aspen and Kingfisher.' It showed a kingfisher flying with its mouth wide open. In that position the lower mandible in particular looks thin and long, quite unlike the blunt appearance of the entire bill. I believe that most likely it was the open bill that so confused me in my field sketch.)

These sketches are all ballpoint pen as I've mentioned. You might think the finality of ink would be inhibiting. But for me it's much better than the ephemerality of pencil. You never know when your fine, carefully drawn fine lines are going to smudge away to a blur. With ink you're sometimes stuck with a line that is wrong. Your mistakes show. But I think it's easier to cover over them and have lines that stay as you made them than to worry about smudging pencil. It is surprising to find ink such a rewarding medium. I used to draw with India ink and liked it for the same reasons. But I've only recently tried ballpoint pen, thanks mainly to two artists I often see at Birdforum, Alan Dalton and Paschalis Dougalis. More than anything else their work convinced me to give it a try. I'm glad I did.
Posted by Ken Januski at 12:23 PM