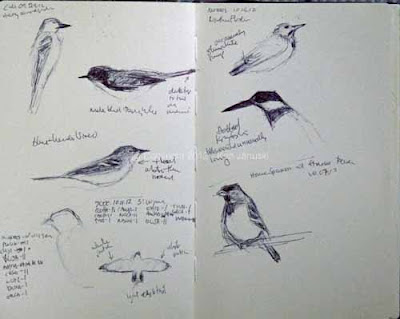 When you see as many birds as I do, mainly because I'm lucky enough to be able to get outside often, you might ask how I choose what to sketch? One of the first questions I think I ask myself is how long I think the bird might stay in its current position? Is it even worth trying to sketch or will it likely be gone before I even open my sketchbook and get my pen ready, just as a wood warbler might? This is always a combination of gut feeling, sense of adventurousness or caution at that very moment, desire to portray an unusual bird, etc.

In the page of sketches above, which actually took a full two weeks to do there were a number of motivations. With the male Black-throated Blue Warbler and the Solitary Vireo on left page it was just the desire to get these birds down on paper. Even while I was sketching the Black-throated Blue I couldn' t remember what part of the face was black and what blue on the bird I'd seen less than 30 seconds previously. There is so much to try to take in and remember when you know the bird may  be gone in a split second. Similar questions arose for the vireo.

Woodpeckers I've found have different bills from one species to the next. One lower mandible may go out from the head in a more horizontal direction and less of an angle than that of another species. So  I'll often try  to sketch a familiar bird just so  I get a better idea of just  how the bill is situated. That's the case with the Hairy Woodpecker on left and Northern Flicker on right here It's all just a learning process, storing up knowledge, made through both success and failure, so that when I do something more developed I'll have the confidence that I'm being true to the bird.

I can't stand overly detailed work, like that which attempts to get every single feather in  the right place. But I also don't want to have the general sense of the bird wrong. For me, unlike for the buyers of much wildlife art, accuracy is not paramount. But it is a bonus. Artistic qualities always come first.

This has always been an odd part of 'wildlife art.' Is is art or science? For me it is always art, but I'd prefer to also know the science  involved.

I never seem to get Belted Kingfishers right. I'm always a bit disappointed. And  sometimes I'm completely thrown by the bill. Is it thick or thin, short or long? It seems to change by individual bird and my viewpoint. In this case the bill seemed particularly long and thick. So that's how I've portrayed it, even though I have many other sketches, and photos, where it s eemed thinner and shorter. I suppose that's one of the exciting parts of field sketching: things are never quite as simple and pat as you might expect.

Last bird here is a House Sparrrow at lower right and a Broad-winged Hawk at lower left. Such a hawk doesn't have a tail that is dark just on the  sides. It has bands of light and dark. And yet that's what I saw so I put it down. I've done this with other birds where what I saw made no sense and didn't match my knowledge of the bird. Since it's an unsual situation though to me it makes sense to just put down what I saw. After the fact I can double check with guidebooks to see if I can make sense of what caused me to see what I thought I did. At times like this I guess I'm showing more of my scientific side than my artistic.

People often think that science and art are opposed. But my guess is that many knowledgeable artists and scientists know that the opposite is the case.
Posted by Ken Januski at 9:20 AM