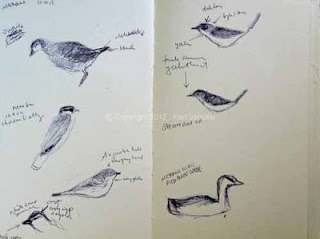 About a year ago someone on the Wildlife Art thread of Birdforum said that my collection of vacation field sketches were a great travelogue. That stuck with me. In some ways my sketches are closer to a travelogue in that I just sketch much of what I see rather than sitting down and just concentrating on a few species and really getting to know them well. So that's the nature of the title.

Above is one of the first birds we saw in upper left, a juvenile Common Moorhen, barely visible in the dusk at 'The Meadows' in Cape May. Below him a Merlin seen the next morning at Hidden Valley along with a Magnolia Warbler and juvenile White-crowned Sparrow within 100 yards of Merlin. On the opposite page a Common Yellowthroat at same location. At bottom a Pied-billed Grebe seen later that day back  at 'The Meadows.' 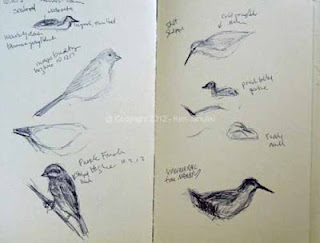 The following day brought an Indigo Bunting and a Purple Finch to Higbee Beach on the left page. Also a distant seabird, possibly White-winged Scoter and a hint of the Common Moorhen again. At right also from 'The Meadows' that afternoon a Stilt Sandpiper at top, Pied-billed Grebe, Ruddy Duck, and a Virginia Rail from memory. One end of the ponds at 'The Meadowns' held Soras, Virginia Rails and a juvenile Common Moorhen. We saw them almost every night of our stay but always in so much dark and in such crowded(with birders) conditions, that I was never full satisfied with my sketches. 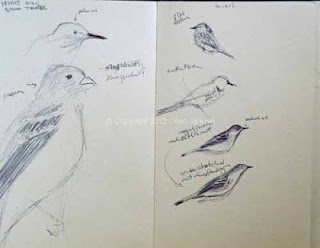 The next day we found a number of Brown Thrashers at the viewing platform at Higbee Beach. A partial drawing of one is at top left above. Below him a beautiful juvenile Blue Grosbeak, mainly in rich browns with just a hint of blue/black. At right a smallish Pine Siskin at top, followed by a Northern Flicker and two versions of a Magnolia Warbler stretching to reach food on the leaves above him. The Pine Siskin was indicative of the many irruptive birds around Cape May: huge numbers of them Red-breasted Nuthatches and Purple Finches. 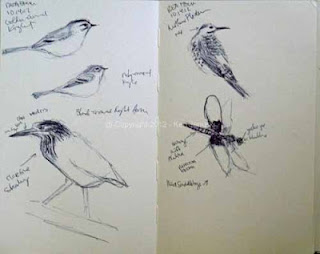 Later that day we stopped at Rea Farm where both kinglets, especially many Golden-crowned Kinglets, flitted about. At the top of the left page is one of each. Below is an immature Black-crowned Night Heron, about 50 yards away from the Kinglets. In another portion of the farm we found a nicely perched Northern Flicker, one of nearly 100 we must have seen as well as the beautiful Red Saddlebags dragonfly. It flew about a field of pumpkins, rarely landing long enough to ID let alone sketch. In the same area were numerous crisply marked Savannah Sparrows. In the back of my mind is a painting that combines saddlebags dragonfly, those sparrows and the numerous pumpkings. 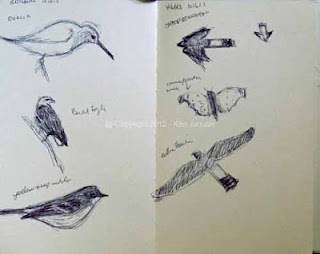 The following day, with rain predicted we drove to Forsythe NWR. There some of our first birds were Dunlin at upper left. Later we saw a distant mature Bald Eagle, as well as the ubiquitous Yellow-rumped Warblers also on left. The following day we were back at Higbee Beach on a very windy day. Raptors swooped, dove, exploded up and around us. It was thrilling. At top right two versions of Sharp-shinned Hawks. We sat and had lunch and I sketched an Eastern Comma on ground in front of us while Northern Harriers carried on in front of us. At bottom is an attempt to capture one of them. 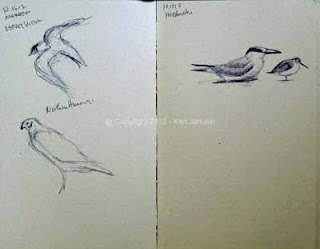 Later that day we were back at 'The Meadows' where we saw a kiting Osprey, his torso curved in an unlikely position. He's at top left followed by a perched Northern Harrier who just didn't stay long enough for me to finish him, in particular his head.
On our last day we hunted for a bird someone had told us was a Northern Wheater and showed us photos they'd taken. Since we've never seen one but knew that one had been there recently we thought the person was correct in calling it a Northern Wheatear. In particular I noticed the rich buff orange color. Later as I thought about it, and looked at guidebooks, I remembered that the photo reminded me of a phoebe. The color then got me thinking about a Say's Phoebe, especially given it's location, perched on a fence rather than down on the ground like a wheatear. As we left town we searched for it for at least an hour where it had been reported. Only when we got home did I get an email saying that it had been IDd as a Nothern Mockingbird, given the misleading buff/orange cast by the sun and the camera. Once again I was reminded of how low a consideration color should be when identifying a bird.
The non-discovery of that rare bird out of the way we headed home and stopped a various Cumberland County locations along the way. It was largely quiet. But we did see a Royal Tern along with a number of Greater Yellowlegs so tucked into themselves that the shape looked more like Dunlin. The tern with a background yellowlegs is portrayed at top right. We saw them at Heislerville WMA, our last stop before returning to the yard American Robins and House Sparrows of our own back yard.
Posted by Ken Januski at 10:58 AM