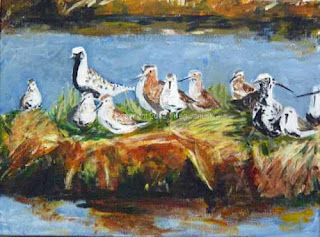 Looking through some old framed artwork recently I realized I'd been telling some lies in writing about my move from abstract to representational art over the last 10-15 years. I was looking for a frame I could use for some upcoming shows. I needed something larger than what I've been using. 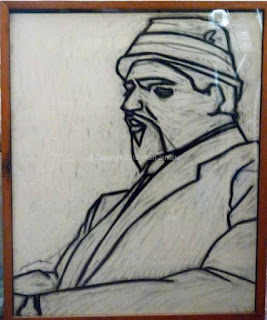 That's when I found this large (23x29 inches) drawing I'd done about 30 years ago. It was  one of about 10 I did of musicians I liked, both classical and jazz. Above is one of Thelonious Monk. At that time I was doing abstract drawings that were just about as spare as this one. I'd decided, rightly or wrongly, that you could make a strong work of art using almost entirely lines.

It was a similar method I used for my  first artworks featuring birds about six years ago. The only difference is that I also used mass and erasures so that it was more than just a linear drawing. Still it was a shock to me to realize that birds and insects were not my first attempts at represenational work.

Inside baseball you might say and you're probably right. But it did remind me of how often art, at least for me, is a balance/conflict between line and mass. Almost all of my field sketches focus on lines. There is something so appealing about line, about getting just the right line to capture a shape. Lines of course don't really exist in nature. But they sure do in art.

The other side of line however, as seen at top, is mass. Instead of defining edges of things the artists tries to capture  their mass, often using light to help.  As an artist line is often a real security  belt. Paint gets messy and it's easy to come unmoored, especially when painting with brushes that really are  too large to make lines.

Perhaps this explains why I  change media so often. I feel a bit unmoored and want the security that line brings, in either sketches or linos. But then I miss mass, color, light and I'm back to painting. More inside baseball I think, but something many artists will understand.

The painting at top, based on a simliar drawing of a week or so ago, is not yet done. Hopefully I will get it done in time for the Members Show at the Mayanunk  Roxborough Art Center on Sunday.  If not it should be in my three person show, 'Wild at Art',  also at MRAC in November.
Posted by Ken Januski at 2:41 PM