Waiting on a Hurricane, and Tumult 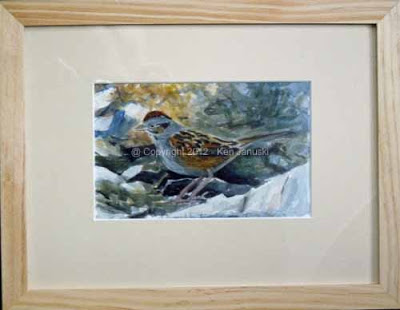 I can think of better things to do than wait on the likely power outage and other discomforts that Hurricane Sandy will most likely bring to us in Philadelphia. We've been lucky in our years here to have escaped much serious storm damage. But it seems we'll need to be really lucky to continue that string.

So after  doing as much storm preparation as is reasonable and possible given how many things have been sold out at stores I decided it made sense to put the final touches on preparation for my  3 person Manayunk Roxborough Art Center show 'Wild at Art' which opens next Sunday. I've decided to exhibit mainly prints. I now have 15 framed and ready to go.

And I plan to show the large acrylic of the two immature Little Blue Herons at Morris Arboretum. But I'd also like to  show some watercolors. As I looked through them today I  finally decided on the small 5x7 inch watercolor of a Swamp Sparrow also seen at Morris Arboretum. I did some minor tweaking on it today and then decided to show it, assuming that is that there is enough room. 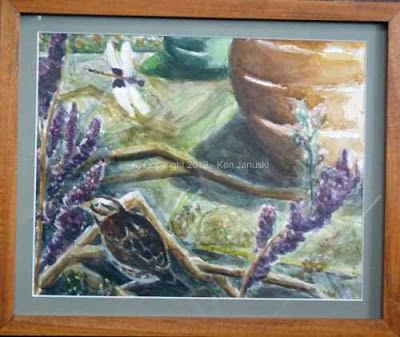 I'm very happy with my new watercolor of the Saddlebags dragonfly, Savannah Sparrow and Pumpkins so that was a certain entrant. It is shown newly matted and framed above. It looks a bit cockeyed due to poor photography. In person everything has the expected right angles. 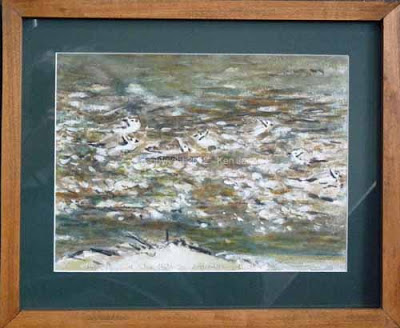 Finally I decided on the watercolor of seven Piping Plovers seen at Stone Harbor last year.  I hate to think what some of my favorite birding places in Cape May and Stone Harbor will look like in a few days. There are a couple of reasons for including this. One is that some people write off bird art and wildlife art as 'pretty' art. It's easy to understand since much of it is. Given the beauty of birds it's a difficult task to show that beauty without verging into sentimentality. I don't think this painting could be considered pretty.

The other reason is a bit more serious. I've written about Piping Plovers in the past. Each time I'm newly struck by the fact that less than 2000 exist! When you see them they can come right up to you, the picture of innocence. They just don't seem rare or threatened for their very existence as a species. Just recently while flipping through a environmental/birding magazine I noticed a headline about 2000 being in existence. I've not had time to go back and read it. But it does remind me of just how rare these birds are. And how threatened they are, including by the idiots with the 'Piping Plover Tastes Like Chicken' bumper stickers.

I should add that the tumult of Hurricane Sandy seems appropriate for the tumultuous times in the U.S. and abroad. I try to avoid politics here, largely because I think people prefer places where they can take  a break from it, those that is who aren't on permanent break from it. And opinions obviously differ. I backed Obama as a practical matter not because of his oratory. That was a strike  against him to me and I think it's harmed his performance as President. Such facility, in art or in politics, can be helpful in the short run and harmful in the long run. So I have mixed feelings about him. Still I think there was no doubt that he clobbered Romney in the last debate and showed how shallow and ignorant Romney is when it comes to foreign policy. So I've been shocked to see intelligent talking heads talk about how he won or showed he's got the right stuff to be President.

I just cite this to show how thoroughly opinions differ. But one thing did strike me in the debate. Romney learned a new word: 'tumult.' The world truly is in tumult, just as areas affected by Hurricane Sandy will be. But the world is always in tumult if you're President of the United States. It's  not a game. It's a  complex world and I'm sure far, far moreso if you're the President. But one thing I'm sure all presidents of the last 50 years would agree on is that the world is tumultuous, as is the job. To look upon the world in tumult today as Romney  has and express dismay at it, as though peace in the world is as simple as just  saying it, immediately disqualifies him for the office.We really can't afford to have someone so vacillating and inexperienced in the world as our next president.

Hope you and yours stay safe through Sandy!

I hope you also have done OK with it as well. I assume that you're in a low-lying area but I'm not sure how badly it affected SC. I do hope it wasn't bad.

We're not on the coast so shouldn't suffer from storm surges. And downhill from us I'm sure there will be river flooding. My main fear is power outages. Time will tell!