Sandy - We Were Lucky 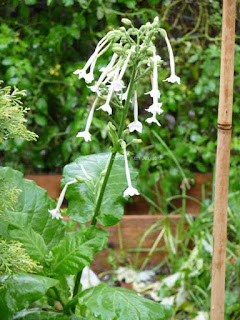 Mid-afternoon yesterday Hurricane Sandy seemed headed straight for Philadelphia. All the warnings seemed correct. The city was declared in a state of emergency. I expected that we would lose power, perhaps have other damage from falling trees or flying debris, and on a lesser note, lose all the tomatoes and peppers still in an unripe state hanging on bushes in the backyard.

With heavy winds and rains predicted, and already taking place to some extent, I was certain of one thing: the beautiful but seemingly delicate flowers of  the volunteer Nicotiana in the backyard would certainly be destroyed. At top you see a photo of one of them from a few minutes ago, with Sandy largely gone.

They emerged unscathed, as did our household and as far as I can tell those of our neighbors. 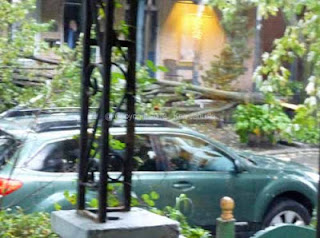 The only sign of local damage I could find was a fallen tree across the street. Amazingly it fell parallel to the sidewalk and not perpendicular so that it crossed the street and landed on any of the cars parked there, including our own. In fact it doesn't even seem to have disturbed traffic driving down that side of the street. A photo is above.

So we've been extremely lucky. By late afternoon it looked like the predicted turn to the left of the storm was a more southerly turn than expected. The maps on television and online indicated Philadelphia would be on the outer edge of the strongest part of the storm. But maps are one thing, reality another. I was still quite wary. Though the trees whipped around  most of the night and early morning and though the wind howled, the storm did in fact largely pass us by.

But that's obviously not the case elsewhere. When one area escapes another does  not. That's a sad fact. We can only  wish the best for those millions, yes millions, of people who were not so lucky.  I just heard on the radio that 20% of Pennsylvania is without power. The only  positive thing you  can possibly say about something like this is that at least some of the victims will be able to weather it and turn it into an interesting experience and story: 'I  remember back in 2012. We got hit by Sandy and didn't have power for xxx days...' For others sadly some of the losses will be irreparable.

One last note on those Nicotiana. We last planted them at least 15 years ago. Then they were absent for at least 10 years. About five years ago they started appearing as volunteers in various parts our backyard garden. But they  never survived long enough to flower. Then this year as they  started taking over varioius raised beds Jerene transplated them to various spots around the beds. By mid-October they  almost looked tropical, four feet tall and full of exotic blossoms. Nature remains full of surprises: some bad, some good.
Posted by Ken Januski at 12:14 PM

I'm glad to hear that you and yours are doing fine in the wake of Sandy. I sit here in glorious fall weather feeling a little guilty as I watch the reports of the devastation in parts of the East and that terrible fire in Queens. Some of the photos I've seen of New York City, particularly the flooding of the subways, are just blowing my mind.

Thanks Gabrielle. The more I hear and see about what has gone on elsewhere, including nearby Jersey shore, I realize how lucky we were.