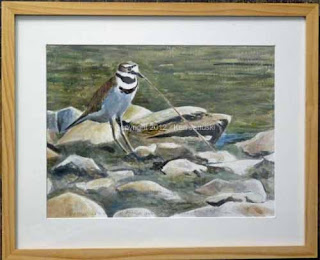 With two big shows in November it's somewhat surprisng to be in another one in October. This is a smaller one, the Member's Show at the Manayunk Roxborough Art Center, a few blocks from our house. In it members of the art center in general can show not just the members of the Artists Coop. For me it's a good opportunity to show work that I might not put in November shows, e.g. 'Killdeer with Worm' above, a 12x16 watercolor, or works I've just finished and am eager to see hanging, e.g. 'High Tide at Nummy Island', a 9x12 acrylic below. 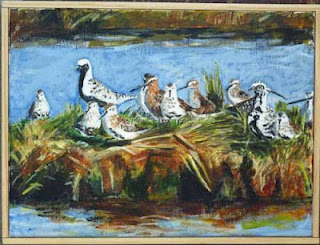 There is some possiblity that not all works will be hung because you just never know how much work will be submitted. If there's too much then not all work will go up. On the theory that there will be enough room though I'm also submitting the work below, a watercolor titled 'Great Black-backed Gull at Flat Rock Dam.' This work seems to be among my most unpopular recent works, at least judged by certain criteria. It was rejected from the 4th Annual Juried Show at MRAC this summer. It tops the list of least visited works at my Etsy store. Almost no one has bothered to look at it. And yet I like it quite a bit and it was well received when I showed it online when I first did it. In the end popular response is not important. I like it so I'm submitting it. I just realized I also showed it at the recent Manayunk Arts Festival and it got little response. Perhaps it's too dark, with a barely visible bird, and even a dark mat. Who knows? As I said it's something I like and it captures the scene of a huge gull dwarfed but seemingly unfazed by the giant dam behind him. 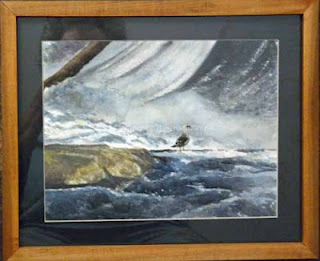