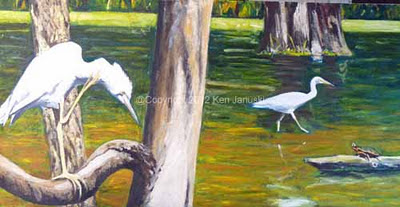 Often the blahs of winter seem to nudge me towards colorful neo-tropical migrants in my art. I remember beginning 2011 with a quick watercolor of an Indigo Bunting. The grays, white and mud browns of winter seem to call out for brighter, warmer colors.

But as this January ends I think it has to be called 'The Month of Herons.' Between the new painting of the two immature Little Blue Herons at Morris Arboretum, the juvenile Black-crowned Night Heron seen at the Manayunk Canal last week and then the comparison of it with the juvenile Yellow-crowned Night Heron seen at the same place in the summer of 2010 it has been a month of herons.

There have also been a number of sparrows, particularly the dead Song Sparrow killed by a backyard cat. But mainly it has been herons.

So as the month ends it makes sense to show the latest version of the immature Little Blue Herons. It has definitely gotten more realistic. I don't think I've ever painted tree bark before, or even had the desire to. And even though this painting started out in an abstract vein something has pulled me toward realism. So for me it is a surprising painting. But part of the enjoyment of art is being surprised.

I think this is about done. If so I'll include it in a show that opens next Saturday and which I'll mention in next post.
Posted by Ken Januski at 5:44 PM