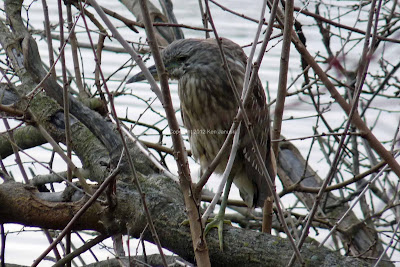 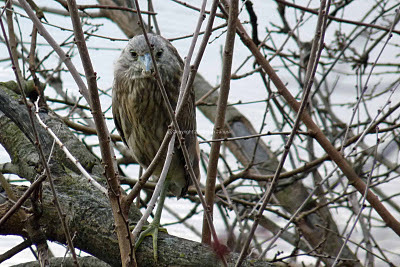 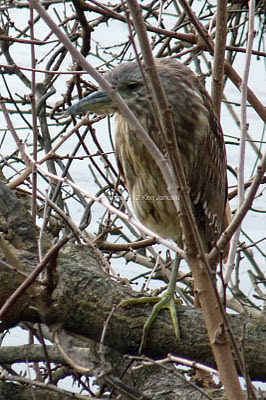 I knew that I shouldn't expect a night heron in January. But there's this perverse notion that always takes hold of me that because I once saw a bird in a certain location another of the species should be there every other time I visit. At least there should be a possibility.

Never mind that it's the wrong season, that the one time I saw it might have been a fluke etc., etc. But I was recently reading 'The Black Swan: The Impact of the Highly Improbable' by Nassim Nicolas Taleb, and he mentioned a study about how people's guesses regarding numbers or probabilities were influenced by the most recent number they'd seen. This is completely irrational and yet it happens. The mind works in very mysterious ways.

Nonetheless I didn't expect to see an immature night heron along the Manayunk Canal today. Three Great Blue Herons was more than I expected. A Hairy Woodpecker was a nice surprise. And yet there it was.

I'd been greatly surprised to find a juvenile Yellow-crowned Night Heron in almost the exact same location in late June/early July of 2010. So I assumed that's what this was. But I can't differentiate juvenile night herons on sight. I did a sketch, took numerous photos, and then when I got home looked at Sibley, Crossley, et al. The combination of fairly long pointed beak, more or less of one color and fairly large white spots on coverts lead me to the conclusion that it's a juvenile Black-crowned.

As has happened before I'm using this blog for documentation purposes for the Pennsylvania Rare Bird listserv. I'd hope to wait until tomorrow to post these photos, along with the sketch and a new watercolor or two. But I see that the blog has had an unusually high number of visitors tonight and I assume its peoplevlooking for photos that aren't yet there. So I'm putting them up now. Tomorrow I'll work on a watercolor and most likely post it and the sketch.
Posted by Ken Januski at 10:46 PM

Thanks Catbird, and my apologies for being so long to respond. I kept meaning to then one thing led to another, and another.

I assumed that the bird did not stay but finally checked yesterday as part of the Great Backyard Bird Count. I did not see him, though that doesn't mean he wasn't there somewhere. It's unlikely but I often get surprised there.