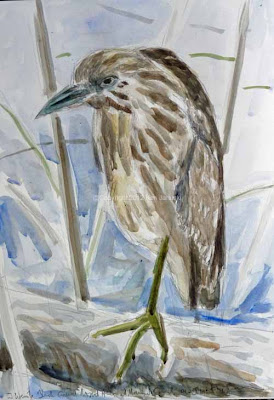 I always like to take the opportunity of portraying any unusual bird sighting in paint. So after seeing the immature Black-crowned Night Heron at the Manayunk Canal yesterday I wanted to hold off on posting photos until I'd also been able to do a watercolor. But the number of hits on my site last evening convinced me to just go ahead and post the photos in the previous post. Everyone who has responded to it has agreed it's a juvenile Black-crowned Night Heron, a really surprising bird for this time of year. 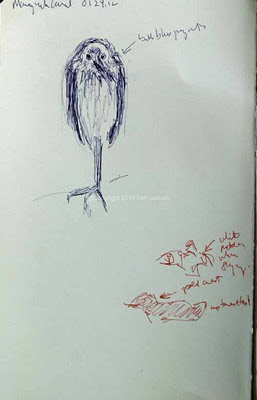 I rarely go birding without my sketchbook anymore. It was only by happenstance that I had my camera yesterday. In any case after a couple of quick photos I wanted to do some sketching. Unfortunately the heron faced me straight on and there was a great deal of foreshortening problems in my rendering of his bill in the field sketch above. At least I captured the pose though I think. We also saw a bird that I flushed. When s/he finally landed across the Schuylkill River it was just a speck. But I wanted to sketch it anyway, especially the blond blush at back of head. When I got home I finally concluded it was a female Hooded Merganser, not a surprise there at this time of year. It is at the bottom right of the heron field sketch.

At top is a quick watercolor based primarily on the photos I took. I'm a little disappointed in the wings, particularly the wing coverts and their white markings typical of a juvenile Black-crowned Night Heron. But it is successful in some ways and I hope will later be the impetus for a more developed painting.

For anyone looking for documentary photos rather than sketch and watercolor they are in the post below.
Posted by Ken Januski at 1:41 PM