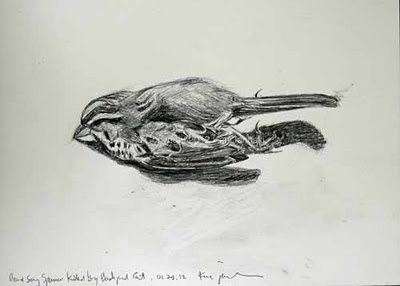 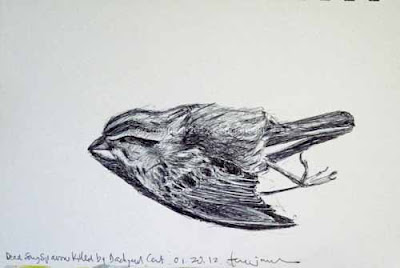 It was a nice sunny day today and should have been good for painting. But it seemed wrong to not take advantage of the song sparrow to do some more studies of it. I especially wanted to try to show wing feathers, both coverts and flight feathers. It is always so hard to see them on birds in the field. And, as with this one, their feathers can be truly exquisite. Sparrows surely have some of the most subtly beautiful feathers.

So here are two sketches showing a bit more of the wing. The first is in pencil like yesterday's version. The second is in ballpoint pen.

When I first was enthralled by bird art the certain cause was 'Drawing Birds' by John Busby. It opened my eyes to the possibilities of bird art. Though the most exciting part by far was the work done from life I was also taken by one of John Busby's own watercolors of a dead Yellowhammer. I still think of it when I draw any bird that has met its end. So I guess this is part of a noble tradition, though one I'd prefer to not partake of with any frequency.

The pen I used for the ink drawing is a Zebra 301A, 0.7 mm in size. Though I've enjoyed using pens with ink that runs I've also wanted to try a pen with more permanent ink. So far this one has worked well.
Posted by Ken Januski at 5:24 PM