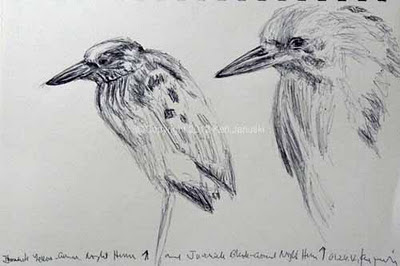 I'm not an expert birder. 'Expert' of course is a relative term. But I've had the experience of knowing some expert birders, either personally or in print or online, so I have some idea what a real expert is.

What I'm trying to do in the sketch above is to do a bit of a field guide ID workshop on differentiating the two birds. This is what's foolish. I'm not an expert and I could be wrong. But in this case I think I'm right and I thought the sketches might be helpful.

The first thing that struck me is the bill of the two birds. Though they can both look blunt in certain views in profile the Black-crowned, which is the bird at the right, is more pointed. I think this is due primarily to the fact that the tip of the lower bill in the Yellow-crowned starts off at one angle then turns to another. This gives a blunt impression rather than a sharp one. This is one of the things obvious in the photos of the two birds and I tried to show it here. These differences are consistent with Sibley's guide.

Another difference mentioned in guides is the extensive yellow on the bill of the Black-crowned. Unfortunately my photos don't really show the lower bill colors clearly. The upper bill is almost completely blue. The lower bill does seem lighter though, perhaps a muddy yellow-green, whereas the photos of what I decided last year was a juvenile Yellow-crowned show a wholly dark blue or blue/gray bill, with the lower bill being darker than the upper. I didn't try to accentuate this in the drawing above.

One thing that I think is critical in bird identification is to first determine what you see, then try to match it to an ID. So for me I have no use for digital guides taken afield. I think people are better off looking at the bird and really studying it. Sketching helps in the looking. In any case that's what I'm trying to to here: look at the most noticeable differences in the birds and then see how they compare to what the guides say. With the bills both the photos and my sketches match the guides in determining the bird on left to be a Yellow-crowned and the rightmost bird a Black-crowned.

One other obvious difference in drawing the birds while looking at the photos is that the streaking on throat and chest is much finer and more distinct on the leftmost bird. I'm not sure I've gotten that across as well as I could have in the drawings. The rightmost bird has more muted, blended streaking. This was very evident in the field. This also in consistent with the IDs of Yellow-crowned on left and Black-crowned on right. It was using all these clues both last summer with the Yellow-crowned and this week with the Black-crowned that convinced me of their identifications. And the guides agree.

Another striking difference but one that I didn't accentuate here because I wanted to focus on the head area is the extensive white markings on the wing converts. They are much larger and more striking on the Black-crowned. I tried to show this in yesterday's watercolor but wasn't as successful as I could have been.

Other clues that confirm the ID: the legs are longer on the Yellow-crowned. I didn't show this in the drawing but it is clear in the photos. Finally something I wished I'd noticed as I finally flushed this week's heron: the feet of the Yellow-crowned are much more visible behind the tail than those of the Black-crowned.

In conclusion I'm going out on a limb here by trying to explain how I differentiated one juvenile night heron from the other and saying why I believe my IDs are correct. And I have to add I feel a little safer doing this in that no one from the PA Rare Bird List has disagreed with either ID. But I'm not at all an expert. I did the above sketch partially for my own education. But I thought others who have trouble with IDing juvenile night herons might also enjoy it.

Oh yes, for anyone interested in the medium: this is in ballpoint pen.
Posted by Ken Januski at 12:33 PM