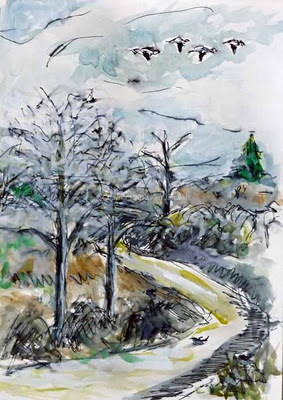 I've been fairly busy over the last 6 weeks either counting or scouting birds for official counts. In early December there was the Christmas Bird Count. Yesterday was the Philadelphia Mid-winter Bird Census. We generally do our part at the Schuylkill Center for Environmental Education. But this year I was asked to add the section of the Wissahickon where the Red-headed Woodpecker has been for three months.

That meant scouting the Wissahickon to make sure he was still around and scouting SCEE to see what birds seemed to be around there. Of course there's never any guarantee that the birds you see when scouting will also be there when the official count takes place.

All of which means I've slacking off on my art work. I do try to do sketches while I'm out but it's always a bit harder in cold weather. For instance I just didn't feel like trying to sketch the Red-headed Woodpecker when we found him yesterday. A few bad photos were sufficient. And of course there's just the pleasure of seeing this beautiful bird. That always takes first place.

I would have expected that the woodpecker would be the rarest bird I'd see yesterday. And it was. They're just never in Philadelphia, especially in winter. But it wasn't the most surprising bird. That occurred as I tried to ID tiny birds in the top branches of the two trees in the forefront of the ink, watercolor and gouache sketch at top. As I did so one of the people also on the count with us said 'What are those birds?' When I looked high in the sky I found: Snow Geese!

I've never before seen them in Philadelphia. That doesn't mean all that much since I don't spend much time in areas where they might be possible. Still it was a great shock to see four of them flying by. I later learned that someone doing another section of the count not far away had also seen some, this time a flock in the hundreds. Since they are in other areas of the state right now it's not a total shock. But it's one thing to know that they're being seen in the vicinity and quite another to see them yourself for the first time.

They were here and gone in seconds so I never even thought of any artwork based on them. On the other hand I did look at them hard, even for the very short time that they were visible. Today a day later I still have a mental image of them.

That's what I used in the sketch above. All the rest is made up, though I did try to indicate the many twiggy branches at the top of the trees where I was trying to identify some very small birds. This is done in a now familar manner: ink from a Bic ballpoint pen that runs when water touches it, watercolor and white gouache to try to bring some light back into the dark areas that the runny ink creates.

The ink run so quickly that it's almost like trying to paint with quicksilver. Once water touches ink who knows where it will run? For some reason I like working like this. It seems to lead to quick paintings, rough though they may be.

When I was studying art in college 'illustration' was a dirty word in the art department as well as in just about every art publication I looked at. I was somewhat sympathetic to this view. I think one reason for this is that it's not hard to find art that sells based on its cuteness. The art is valued almost entirely for the 'cute' subject and not at all for either the honesty of the artist in portraying it or for his or her artistic skill. It can seem horribly sentimental.

At the same time though, even way back then, there was something that bothered me about this. Regardless of what anyone says about progress in art in the visual arts there will always be a place for representational art, for art that honestly portrays the world around it.

I deliberately used 'illustration' in the title of this post. This is an illustration, even if only in a very rough manner. I'm portraying an event that occurred and that I found memorable. That impetus will always be a valuable part of art I think. I continue to love very many types of abstract art and I think my own work is fairly abstract. But that doesn't need to be in opposition to illustration. They can readily work together. 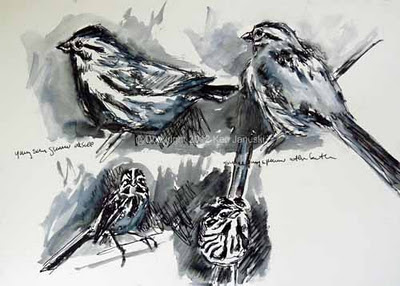 I also wanted to continue my studies of Song Sparrows. So today I did a few more, based on photos like those in the last post. The top sketches show a young Song Sparrow that had just bathed. The bottom two are mature birds including one from our backyard. This is the same runny ink style. It's hard to explain. I guess you'll either like it or you won't! I do find it very useful in inspiring me toward more developed work. This as usual is done on one of the heavier Stillman & Birn sketchbooks, this time one from the Delta series.
Posted by Ken Januski at 4:09 PM

Hi Ken, I very much like the runny ink in your sketches and the snow geese illustration is terrific. Ellen

I'm always glad to hear what pepople think. I think most artists really work mainly for themselves as audience, at least if they're not working on a commission or something similar. But it's always hard to gauge the reactions of others. So I always like to hear what people think, especially if they like it.

The snow geese illustration is really simple but I have to say I enjoy it myself. I guess that's why it's always worth trying something, even if you fear it may be a total disaster.