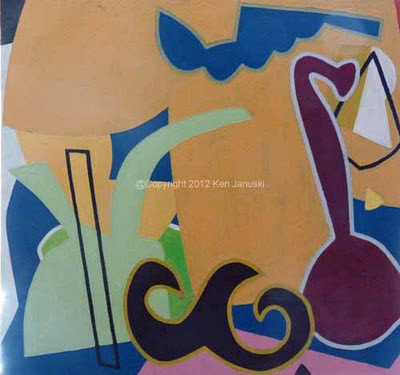 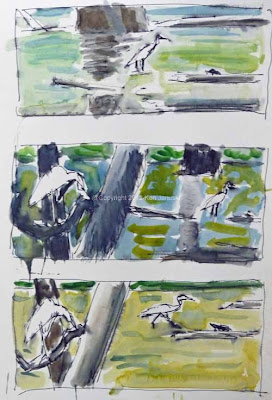 I was an abstract painter for many, many years. But I've only done one primarily abstract work in the last six or seven years. A few days ago I was sorting through some old frames and canvases from my abstract days. I was hoping that I could salvage a few unused frames to use on my recent bird paintings and drawings.

I found one or two. What I didn't expect to find were some primed but unpainted canvases all set to be painted on. Nor did I expect to be taken with some of the old abstract paintings I found.

I put a lot of work into my abstract work. I consider them very accomplished (even if the rest of the world doesn't). Most of those paintings I remember well. But I'd forgotten about some of these smaller works that had been banished to the basement. One of them is at the top of this post. It's an acrylic, about 32x32 inches. Since I can't remember what I originally called it, or if I even named it, I'm temporarily calling it 'Sit Still.' This for the slightly rocking, off-balance quality that it has. It might not be evident in the photo but there is much visible underpainting in this. It comes from changing, changing and changing until I felt that everything, shape, color, balance all fit together. In many of these works there's a balance that, at least to me, always seems about to fall apart.

One of the unpainted canvases I found was an odd 2'x4' shape. I don't like such strong horizontal, or vertical if you turn it on its side, formats. I can't imagine why I made one in such a size. But beggars can't be choosers, don't look a gift horse in the mouth, etc., etc. My recent return to acrylic painting has been limited to canvases not much larger than 18 inches in the largest dimension. I've been happy with them but they seem like studies. I used to paint 6'x8' paintings. So this fairly large found canvas seemed like a good opportunity.

Because it's such a strong format many things wouldn't work on it. Sometimes sketchbooks are sold in this shape and called 'landscape' format. It does lend itself to some panoramic landscape scenes. 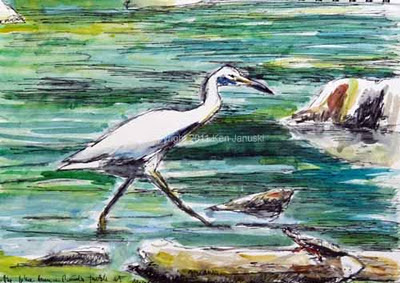 I haven't done much work like that, especially work that includes birds. But I did remember one recent ink and watercolor sketch that might work. It is the painting of an immature Little Blue Heron with a Painted Turtle on a log above. It's really not that horizontal but I might be able to improvise on it. 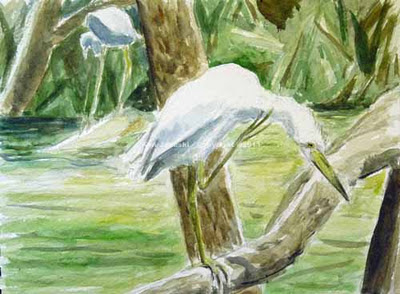 That thought led me to this earlier watercolor of immature Little Blues, itself a composite of numerous sketches and photos.

This morning I did some preliminary sketches combining these two works in various ways, using a very strong horizontal format. They're at top, beneath the abstract painting.

I suppose this might seem very odd compared to the realism of my recent sparrow works. I probably wouldn't have done it if I hadn't run across the abstract acrylic, realized how much I liked it, and then found the blank canvases.

I sometimes wonder if art should not be split so much into abstract and realistic as urban and rural, or perhaps modern and traditional. For most of my life I've preferred the modern and the urban to the traditional and the rural. But never exclusively. Even in the height of my infatuation with Matisse and Picasso I admired people like Chardin and his quiet still lifes. Since I've been working naturalistically I've stayed closer to the traditional, rural, respectful of nature and not willing to take liberties with it. I still don't like the idea of possibly cheapening it by using it as just a frame for abstraction. But I think it may be possible to avoid that. In any case I think I'll be trying it soon on that odd, horizontal canvas Many of my lincouts tend more toward abstraction but never so far as the painting at the top. I'm guessing that this new painting will go even further toward abstraction, but I might be surprised.
Posted by Ken Januski at 11:52 AM