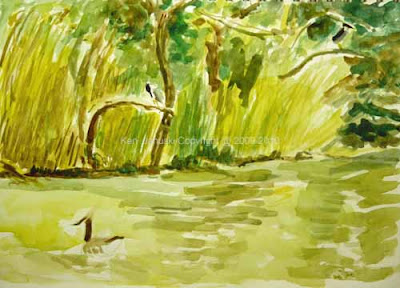 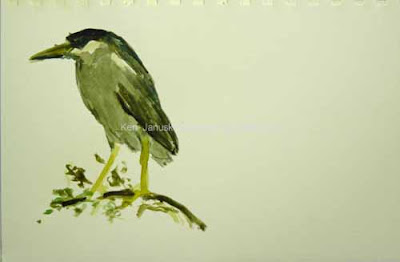 When I do a number of quick works as I have over the last two days I wonder where I should post them, here, on the Wildlife Art thread of birdforum, both, or maybe neither. Birdforum seems to be more for professional and/or dedicated wildlife artists. This blog, I think, tends towards a more general audience, people who are interested in nature and birds and art but maybe aren't as thoroughly devoted to it.

This is a guess on my part. I don't do reader surveys of people who read the blog. But based on the comments I've gotten over the years I think it's primarily people who are interested in nature or those who are just getting comfortable with nature-based art.

Because of that I tend to detail my process more here than at birdforum, on the assumption that people will find it interesting AND aren't already familiar with it because they work similarly themselves. The end result of that is that I don't always post the highest quality work. This is more like a scratchboard than a gallery for finished work, though I do include that as well.

Which brings me to today. A week or so ago I did a quick 15 minute watercolor sketch, seen below, based on a photo of a heronry at Heislerville WMA. I wanted to see if I could make a painting where the two herons were so small as to be almost unnoticeable. I realized after the attempt below that I'd need to study herons more so that I could summarize them at a very small scale. To do that I tried a quick watercolor of a Black-crowned Night Heron, above. Then I tried another version of the heronry. It is at the top.

I think I'm at the point now where I'm ready to try a version on better quality watercolor paper. 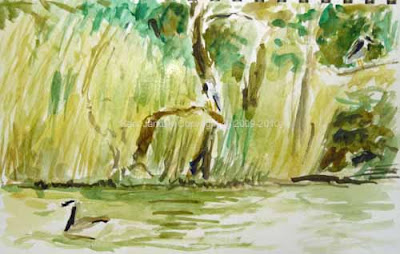 I like to work this way. I keep approaching the subjects from various directions. At one point I think all I've learned will come together in a finished painting. 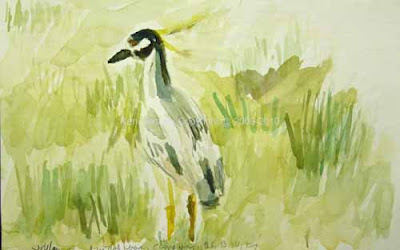 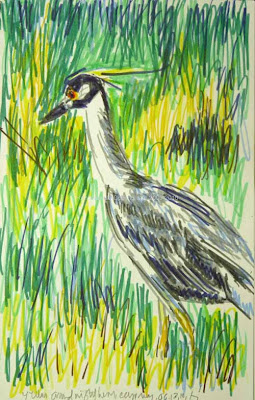 Art is such a solitary pursuit that I find comfort in reading about other people's processes and discovering similarities or being inspired by new ideas for how to approach things. Your process of multiple quicker works on the same subject in different media reminds me of my ruddy turnstone "phase" that I went through back in the winter. I so enjoyed concentrating on one subject like that.

I'm still really impressed by what you're doing with the felt-tipped pens!

You know I'd sort of forgotten one of the most obvious reasons for reading other artists blogs. As you say art is such a solitary pursuit. So it's nice to see how other people work. Pete Dunne often describes Willets as birds that look like they're stunned, as though they've just been hit by a 2x4. I'm starting to feel like a Willet for having missed that basic thought about artists blogs.

The felt-tip pens are funny. I've definitely had some unpublished failures. But I'm still surprised at how successful they can be on some scenes.