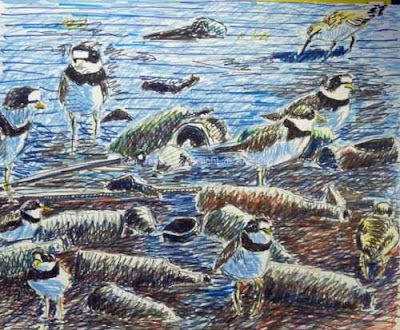 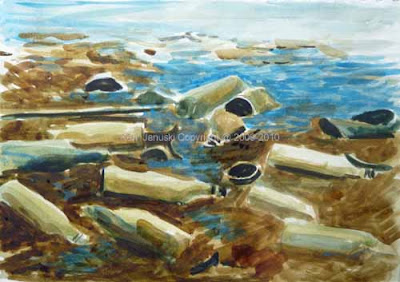 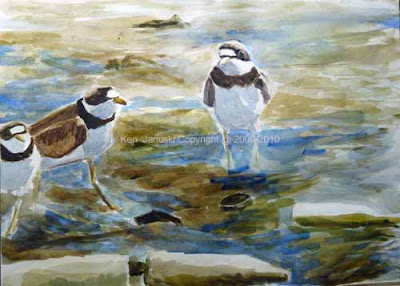 I know I'm probably pushing the 'junk' theme. Why would anyone title their posts 'junk' of some sort or another? Well because that's the subject, at least partially, of a painting that I hope to do: Semipalmated Plovers, and maybe Semipalmated Sandpipers as well, amidst the mud, muck, bottles and other junk that I saw recently at Heislerville WMA.

I'm not an artist that deliberately seeks out the ugly. But I don't like to do 'cute' art either. It's so easy for shorebirds, plovers in particular, to look cute. That's not their fault. It's just the way humans tend to anthropomorphize their appearance. So the odd juxtaposition of them with the junk of the mud and bottles was some how appealing, especially as the way the light hits the muddy bottles is in itself beautiful.

Anyway, I hope to create a beautiful painting of this scene eventually. In the meantime I've been doing some watercolor studies of the mud, bottles and occasionally a bird or two. I'd much prefer to just get on with the birds. But the junk is an integral part of the painting. So I've forced myself to spend some time with it. You always learn something from such tasks.

*************
A few hours later. Just couldn't resist experimenting with this theme in felt-tip pens in a larger scale. The new drawing is at the top. Eventually I hope all of these works will lead to a particularly good finished watercolor. Never any guarantees though! You just have to hope for the best.
Posted by Ken Januski at 2:28 PM

Hi Ken! Thanks for stopping by my blog. I had to take a minute from all the unpacking, organizing, and such to check in on your blog. I haven't read all of your posts that I've missed but I do think your whole junk theme is great! The juxtaposition really makes the viewer pause. From an artistic point of view, I can also see why you are drawn to this theme. I'm looking forward to seeing how this develops!

I also really like where the felt-tipped pens are taking you. That medium seems to really lend itself to your work and I can see why it helped with your block. The drawings are very alive. And as always, I admire your sense of light and shadow.

No rest for the weary, so back to work I go. Next unpacking project is my studio - yay!

So happy to see that your finally settled in your new apartment, and with resident chickens no less!

I've had great fun with the felt-tip pens. They surely have their limitations but that's more than made up for by their good qualities. The oddest thing is that I've had them for a number of years but not used them because I didn't like them the first time I tried them.

For everything a season I guess.