That Heronry - Step by Step 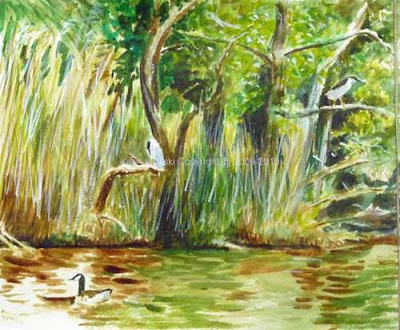 Yesterday I finally settled down and got to work on a finished watercolor of the heronry on good watercolor paper. For some reason I just wanted to get some version of it done in paint.

The problem with heronries is that they are large. You can capture some sense of all the trees or you can capture an individual bird or two. But it's very difficult to capture both. After all the preliminary studies of last 7-10 days this seemed like the best way to get both birds and trees.

The painting at top is the finished version, an 11x14 inch watercolor. I'm including some of the steps along the way below. 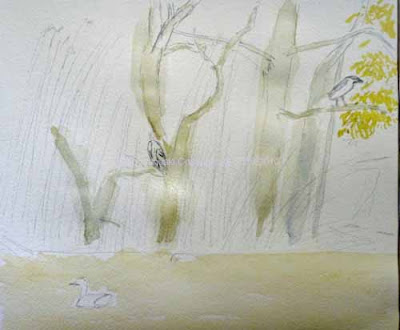 I did a sketch first on same size paper to make sure I had the proportions more or less correct. Then I drew the sketch above on the good paper. I often skip sketches but this time I didn't because I wanted to make sure I had planned out where the birds would go, especially since I needed to preserve white of paper for them. One problem with this however is that the lead of the pencil itself can dirty the paper. 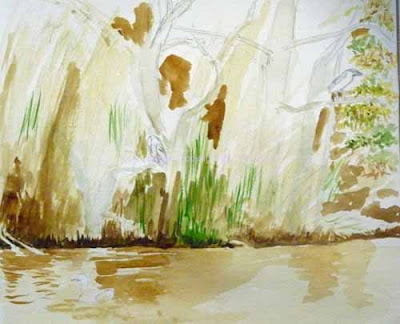 Then I got to the first problem. Where should I start? I knew I had a number of possible problems: 1) how to show the individual reed stalks, especially since they were very light in value; 2) how to show the pine needles at right, near the Black-crowned Night Heron; 3) how to blend in the dark areas in shadow. When I know I have such problems I just sort of feel my way along. So in the painting above I painted the pine needles, some of the reeds and some of the shadow. 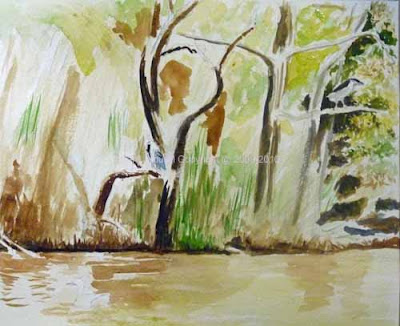 I then added more dark shadows as well as the dark part of the trees. I knew that this would be a problem though. There were light reeds going on front of some of the dark trees. How could I accomplish this in transparent watercolor. The reeds would never look light on top of the dark of the trees. I've never used masking fluid and that might have worked but it's always seemed far too finicky for me. Still if I had some I might have tried it but I didn't. So I just put the dark down and figured that the solution would eventually appear. 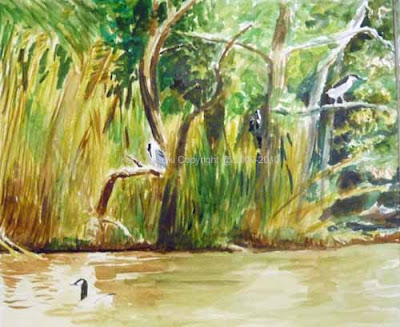 Next I added some of the green foliage at top as well as the light reeds in center. I knew that using yellow for reeds would not really accurately portray what I saw. They were actually much lighter and tanner in reality. But I couldn't figure out how to get that in watercolor. 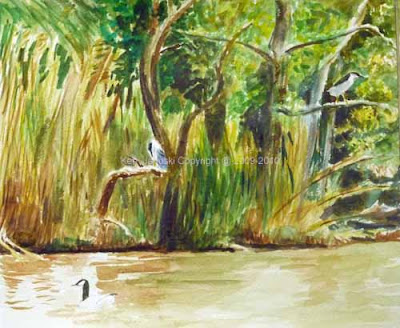 And some more finetuning to try it all together. At this point the one big question loomed: should I try to make the reeds lighter by adding white gouache. And if I did that should I add it in other places as well to try to get a few more white highlights. Finally I decided to do so. I then went over some of the gouache with transparent yellows to try go get a more realistic portrayal of the reeds.

This is shown at top in the final version. I also did something I didn't really intend to. I made the water darker and with stronger reflections than I planned. Once I made a small change I saw that I needed to make another small change, etc., etc. I think it works like this. But it was a surprise that just took over the painting at the end.