Paint with a Brush - Number Two 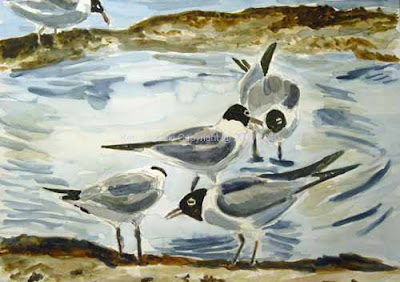 I wanted to title this post, 'Think Like a Brush' or something like that. But I had this vague recollection that I'd already used that title. A quick search showed I hadn't used exactly that but something similar last November.

My point in the original post was that I came to the revelation of the quite obvious that when you paint you should paint with a brush. I know this seems self-evident but what I meant was that often people use a tool while pretending that it is actually a different tool, like mistaking a brush for a pencil. One makes linear marks. The other can make linear marks but can also create areas, volumes, space and atmosphere. A brush has far more flexibility than a pencil once you learn how to use it.

So that's the loose theme to hang around a couple of recent watercolors: Think Like a Brush. What I mean here is just a continuation of the first theme: once you've realized that a brush is not a pencil, or some sort of manual equivalent to a computer fill tool that just colors in an area, then you can start to explore what a brush can actually do.


The watercolor at top is a relatively quick watercolor of some Laughing Gulls at Reeds Beach in New Jersey. We had gotten there a few days before the migrating Red Knots and other shorebirds had arrived to feast on the Horseshoe Crab eggs. But the Laughing Gulls were already there, as wild and raucous as could be. Though the stars of the locale were not yet present I really wanted to portray another common scene, that of the Laughing Gulls.

My last watercolor of the Glossy Ibis required more control, at least in the bird, than I'm used to so I felt like doing something here that allowed a little more freedom for brushwork and design. I also wanted to keep the work transparent and not veer towards opaque watercolor as I'd done with the ibis. 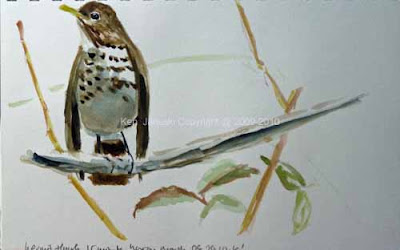 One of the best ways to think like a brush is to allow yourself only 15 minutes to do a painting. And don't use any pencil guidelines. In doing so you really have to consider areas of color and value. You can't spend too much time on lines, or finely delineated contours. That's what I did in the quick watercolor of the Hermit Thrush above. I did use a small brush to articulate the eye ring and to make some of the facial markings. I knew I only had 15 minutes so most of the painting had to use broader brush strokes. This too is part of thinking like a brush. You have to make very quick decisions about which brushes to use and how to use them.

The painting really isn't complete. That's because I stuck strictly to the 15-minute limit. I can always do something more developed later. For now it forced me to decide what I thought was most important in the painting and that was primarily the bird itself.

I do think many people are fearful both of brushes and watercolor. Obviously great art has been done with them. But once you pick them up and try to use them yourself you can also quickly see how easy it is to make a real mess, probably an irredeemable mess. The best way to get over that fear of a mess is to just keep working and painting.

Learn to think like a brush.
Posted by Ken Januski at 1:49 PM

Email ThisBlogThis!Share to TwitterShare to FacebookShare to Pinterest
Labels: correct tool for the job, drawing with a brush, Laughing Gulls, Reeds Beach, watercolor