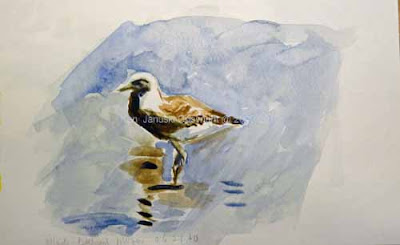 I'm a very logical person and perhaps that's why I did well in computer programming. But I'm also a big believer in non-linear thinking, roundabout thinking, or just plain daydreaming. When I was young I read a book called 'The Act of Creation' by Arthur Koestler, which as I recall these many years later, was about the similarity in the process of discovery of both scientist and artist. The particular analogy was the pun, where there is a slight mental explosion when a word understood in one context in suddenly seen in another context. As I recall this was Koestler's basic thesis about how all creativity works.

He also mentioned that many important discoveries occur not when a person is concentrating on a problem, but at some other time when the problem, whether scientific or artistic, is no longer in the forefront of consciousness. This seemed true to me then and it still seems true to me now.

Humans can be very logical. But the brain works in strange ways, and not always logically. So when I'm doodling away on a new drawing or painting for a picture I'm often not highly focused. I have the subject in front of me but I don't try too hard to get it right. I tend to let the medium take the lead in where the picture goes.

That's more or less true with the work here, including the watercolor of a Black-bellied Plover at top. This is not pure doodling, in the sense of pure randomness. But it is doodling in the sense that I just wanted to put down marks and see what happened. Still I did try to be true to the plover. 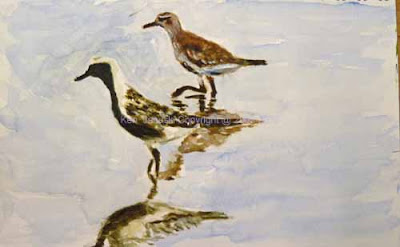 Since I used a similar, loose approach, in all of the works here, including the watercolor of two Black-bellied Plovers above, I thought I would use doodling as the theme.

But before I did so I decided to look up its meaning. Imagine my surprise to see that Wikipedia says it was first used in the 17th century to indicate a fool or simpleton. This supposedly was the intended meaning of 'Yankee Doodle' as used by British soldiers. Huh?! This wasn't what I expected.

Wikipedia goes on to this further surprise: Mr. Deeds in the film 'Mr. Deeds Goes To Town', used it to mean 'scribblings to help a person think', the contemporary usage. According to wikipedia this meaning was invented by the screenwriter Robert Riskin!

Well who would have thought the word had such a complex history? 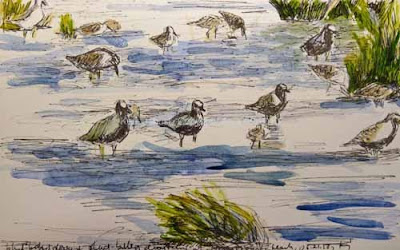 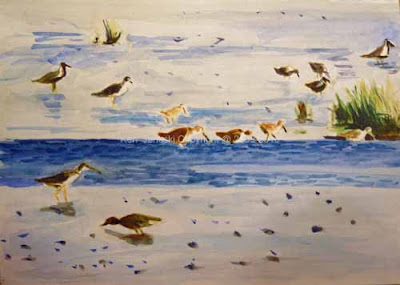 Back to the project at hand though. These last two works, one a watercolor and the other an ink drawing with some watercolor washes, also were somewhat doodly. I knew the subject matter but I just started making marks on the paper to portray it, then responded to the marks as much as to the subject. So in that sense they were somewhat improvisatory.

All these works were also investigative. I'm not really sure if I want to do a more developed work using Black-bellied Plovers and other shorebirds as subject. Playing around with them like this gets me to understand their form and markings better and also decide whether it looks like a painting is lurking within the doodles.

The answer to that: I'm still not sure. This doodle may need to get back to doodling.
Posted by Ken Januski at 1:42 PM