The End of Junk 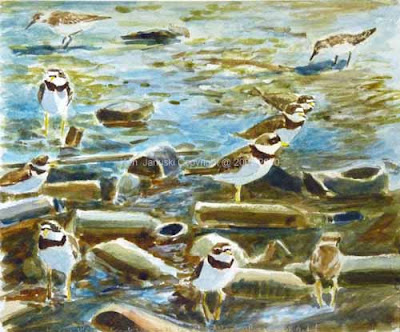 After a week's worth of studies in pencil, watercolor and felt-tip pens I finally got to work on a finished version of the Semipalmated Plovers, Semipalmated Sandpipers, bottles and other detritus at Heislerville WMA in New Jersey.

As I might have said before I and my wife didn't even notice all the junk on the 3-4 days that we visited. We were too taken with the birds. It was only when I looked at some of the photos that I took that I saw that all the mud was really mud-covered detritus, and the birds, especially the plovers, blended in perfectly. It was just the oddest, and saddest, juxtaposition.

I could go on and on, making analogies about this and the oil spill in the gulf and other such portrayals of man's degradation of his environment and the creatures who live in it. But I won't. The one thing I will say is that progress is both good and bad. I'm more skeptical about it. But when I'm in the company of certain other people, and doctors spring to mind right off, they are more positive because they're more exposed on a daily basis to the good aspects of progress.

There is no doubt that it is both good and bad. But I think most people know that. The problem I see is that much progress is irresponsible. We need oil for various things so we will sacrifice anything and everything to get it. If an oil company were to try to be responsible they'd probably be driven out of business by their competitors who are less responsible and have a lesser concern for safety.

I've just finished reading a number of books on the financial crisis. Almost every financial firm eventually felt that it also had to take excessive risks just to keep up with its more successful rivals. Often the latecomers suffer the worst.

But my point is that we don't seem to live in a society that cares much about being responsible, that thinks about other species or our own species in the future. I really don't know if this has always been the case. I fear that it has. Either way there are always a small number of people who try to be responbible. But they always face an uphill battle.
Posted by Ken Januski at 10:09 AM