Take a Break - Sketch a Bird 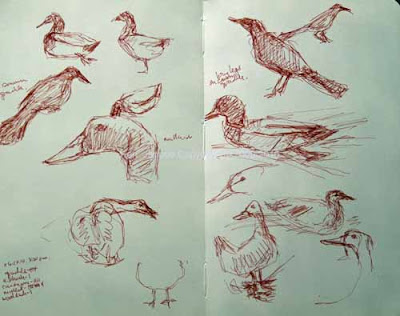 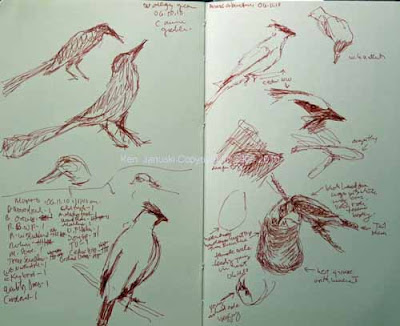 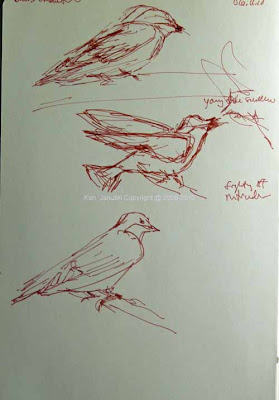 A short year ago I could never have written the title above. Finished artwork was easy. It was field sketching that was torture. I took a break from field sketching by doing the easy work of a finished drawing or painting.

But times have changed. I think there are really two reasons for this: 1, I bought a decent spotting scope so that I got better views of birds, and also had another free hand for drawing, and 2, the incredible bird artists on the Wildlife Art thread of birdforum, most of whom are dedicated field sketchers. Those two factors I think, along with a fair amount of practice, have helped to make field sketching fun for me.

After all the work that went into the last painting, including all of the studies, and the pressure of not messing up the final painting after all the preliminary work, I felt ready for something different. So the last two days I've been able to devote a little time to sketching in the field. Fortunately it hasn't been so hot that it was uncomfortable doing so. In fact today was a beautiful sunny day in the 70s.

Anyone who knows birds well will realize that there are many mistakes in these drawings, sections where I just got something wrong. But often I also realize that myself, after I've made the mark, or maybe after I get home and have looked in a guidebook to check on something. That doesn't bother me. It's only when you learn that you don't know something that you're capable of gaining that knowledge. So the bills on my Common Grackles are not quite right. I need to take a better look at them in guidebooks and other reference material and next time I'm more likely to get them right in the short time that a grackle poses for me.

I've never been all that bothered by failure, at least in the things that are important to me. The reason for this is that early on I learned that you have to fail in order to learn. It's just part of the process. Everyone who is successful has failed. It just doesn't work any other way. The important thing is not to lose all momentum due to fear of failure. You just have to try something and then learn from it. I normally wouldn't go on in this preachy way except that I've seen so many people in my life who don't seem to understand this.

Enough of that psycho-babblish diversion! I just meant to say that today the successes in my sketches, at least to me, far outweigh the failures. So that keeps reinforcing me to do more of them. And I make greater effort to get more unusual birds down on paper. I don't have to stick with the big, more sedentary birds.

And today's star bird, though you'll probably have a hard time finding it, is a female Orchard Oriole feeding her young in their pendulous nest. It was a real treat to find them today. Unfortunately she was rarely there. She was out looking for food for 5-10 minutes at a time, then appeared for less than 15 seconds to feed the young, generally just one of the young. Then she'd fly off again, often with a fecal sac. I really wanted to get this down on paper, so I set up my scope and focused it on the nest. I drew the nest, and the open mouth of one of the young, then waited for the mother's return. This was a lengthy process. This is portrayed in the lower right of the second page of drawings. I wish I'd been able to do a better job but I'm happy with what I got. And I'm happy that I just decided to try it, and didn't worry about it being too difficult.

Also on that page are a number of Cedar Waxwings, which are surprisingly antsy, some Commong Grackles, and a hastily seen and drawn White-breasted Nuthatch in the upper right.

The last page includes just one juvenile Tree Swallow. I also focused the scope on him. Every once in awhile he'd let out a squawk, open his mouth and lift up his wings. A second later another Swallow would appear, in seeming attack. This is portrayed in the middle of the page.

It's these individual moments as well, that of the Orchard Oriole feeding her young, and the Tree Swallow fighting off a young peer, that give added meaning and enjoyment to this type of sketching. You actually capture a moment in time. I believe that the excitement of doing so often comes through in sketches from life. And that makes them all the more worthwhile and exciting.
Posted by Ken Januski at 5:05 PM