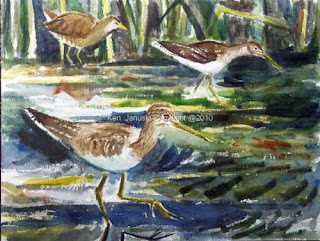 I believe that this painting is now finished. After I looked at the last version I thought, no this isn't done. It just doesn't have any life to it, especially in the overall feel of the painting.

As I've mentioned ad nauseum I like improvisation in art, at least in my own art. I'd probably have a heart attack if I did a painting with high finish. It just makes me queasy.* That may be why many artists prefer sketches to finished work, though they need to make finished work in order to sell it.

In any case I've wanted to use some of the improvisation that I've used in my charcoal and pastel work in my watercolors. But I rarely try it. The problem is that watercolor doesn't lend itself to improvisation. Once you make a mark you're generally stuck with it, at least if you want to keep the freshness and luminosity that is watercolors main strength. And yet it is possible for people who have really mastered watercolor.

So when I looked at this painting I thought, Enough! I've got to try something bolder here, something more like my abstracted Green Heron drawing of a month or so ago. So that's what I did. I did risk having it turn to dark, bluish mud. But I think I've been successful.

Because you're more or less stuck with the marks you make in watercolor it's tempting to draw careful outlines and then color in with teeny brushes. There's much watercolor work of this sort. And some of it is quite beautiful. But you shouldn't have to limit yourself to that. So here I used some bigger brushes with a lot of paint on them. I let wet colors run into one another. I made marks that don't really represent anything. But to me they help to hold the painting together. To me at least they have helped to create a painting that vibrates with color, light, pattern and still is true to its subjects.

When I finished this last night I realized I might wake up this morning and think it was a disaster. But I also thought it was would have been worth it. Sometimes you just have to push your art, or anything else, to another level. In doing so there's always a great risk of failure. But it's also the only way to grow.

*Having just been perusing the 2010 Birds In Art catalog it's fresh in my mind that one of my favorite paintings in it is a marsh scene by Robert Bateman. It's taken me a very, very long time to come to appreciate Bateman. And it's all because of his high finish. But as I've read more about him I've realized that's something he likes and something he's done for a long time. What I think makes it less bothersome in him is that he combines it with a real knowledge of the entire environment he paints as well as a great design. And he is a true environmentalist. But still my reaction, maybe even my taste, is to pass by this type of 'high finish' painting. It's just something that is not to my taste. But seeing that some artists like Bateman also do sketches from life that are both good and felt show that they choose the high finish intentionally, not to cover an inability to feel the scene portrayed. It's so antithetical to my own tastes that I have a hard time understanding it. But I have no doubt that it is genuine.
Posted by Ken Januski at 10:26 AM