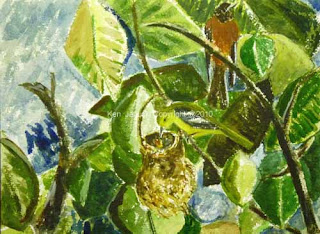 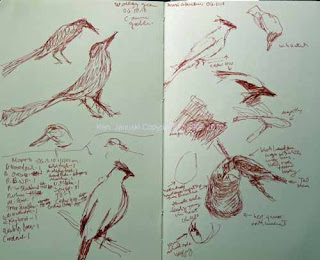 It was a great pleasure, and surprise, to find a female Orchard Oriole feedng her young in a nest at Morris Arboretum early this summer. I did a quick sketch as shown above. But it was hard to see the bird buried in the foliage, especially as she was there just momentarily then headed off in search of more food. When she returned it was always in a slightly different pose.

Since I knew I'd probably want to do a painting of this I also took a number of photos for reference. Unfortunately because she was buried deep in foliage they turned out very dark. As I watched her I eventually discovered the male in the same tree, not close but at least in the same tree. So I took some underexposed photos of him as well.

When I began painting birds I relied on photos that I'd taken. I found a number of problems with this: I was getting my inspiration from marks on a flat surface, not from a living thing in a living three-dimensional world; I also often found myself hypnotized by the photos composition. I had a strong tendency to come pretty close to copying not just the bird, but also the composition when I painted. A slave to my photos? Not completely, since I tend to work loosely, and eventually abandon my original source. But still more indebted and limited than I liked.

So 12-18 months ago I forced myself to do real field sketches. They might be bad but they were honest. Then over the last few months I've looked to my sketchbooks for ideas for paintings, not my growing collection of photos. It's so much more inspirational to work from sketches rather than photos.

Just one problem though. Sometimes my sketches don't show much, as with the Orchard Oriole on nest. I started this painting three days ago, thinking I could get away with just using the sketch. But as I worked on it I realized I was fudging the bird. So I ended up referring to photos of both male and female more than I really liked. Still, at least for the female, the pose came from the sketch, not any photots.

I ran into another problem: heavy foliage. My guess is that this is the bane of many an artist. Birds, or other animals, are seen in habitats, many of which include leaves, or grasses which are just as bad. Some artists solve this my painting every little detail, or at least they're skilled enough to fool the viewer into thinking that they have. Others just put a few loose brushstrokes around the birds, happy with the mere suggestion on an environment. And then others try an obvious shorthand. That's what I've tried here. The thing is, I don't have a shorthand language for leaves. Each painting I feel like I'm developing one all over again. That may be why I spent three days on this. I kept changing it, veering off in various directions, trying to find something that worked.

This is done for now. I've learned something and the result I think is cohesive. Most likely I'll try this scene again, maybe next week, maybe in a year or more.

I'm happy that I've gotten to the point where I'm now using field sketches as my inspiration. There's a lot of freedom in working this way, though also, as you can see, some difficulties.
Posted by Ken Januski at 12:30 PM