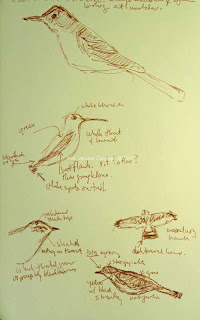 they may all be here tomorrow, at least if you live in the NE United States:Monumental Migration. Along with other migrants of course.

********************
Well it's noon on the day of the predicted fallout. I spent 3 hours at Carpenter's Woods in Philadelphia and found a few birds but not a whole lot more than I would have expected. The best bird was a female Blackburnian 50 feet away and 100 feet up flitting through the leaves. Not much of a view but fortunately it's hard to mistake a Blackburnian. But I almost did. There was another bird in the same area that I and another birder first thought was a Black-throated Green Warbler. About 15 minutes later I sketched the face as I remembered it. The face was bright yellow with dark auriculars.When I got home and checked the field guides though I wondered if it actually could have been the Blackburnian. It also has dark markings around the auriculars. And it was so far away. Finally though I stuck with the Black-throated Green. The color was yellow not yellow-orange and the auricular patch seemed more distinct than in the Blackburnian.

So it was nice to see these but it really wasn't a fallout. Other warblers included another Black-throated Blue feeding on Devil's Walking Stick, a male American Redstart and two Magnolia Warblers, one of them sketched from memory at lower right.. A Eastern Wood Pewee which has been there for weeks if not months was also there and is on top left of sketch. Ruby-throated Hummingbirds have also been regular visitors there and one is included on the sketch.

The most surprising bird was a Broad-winged Hawk. I'm sure that's not so unusual this time of year but because of the wooded nature of Carpenter's Woods you don't see that many. Mainly because you're not looking up at the sky.

All in all a beautiful day and a good day  of birding. But for me it wasn't a fallout day.  I hope it was for others.
Posted by Ken Januski at 10:31 PM