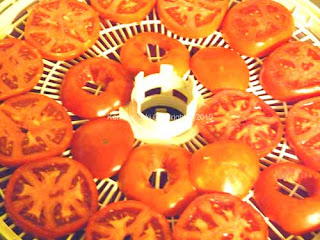 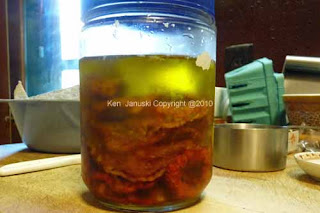 As the title of my blog says, 'Art, Birds, Nature.' That was a pretty prophetic title when I picked it a number of years ago, especially as the most important subjects over time have become art, then birds, and finally nature.

Today nature comes to the forefront for a change, though this is cultivated nature, e.g. tomatoes. Though it's not quite fall, and I'm not trying to hurry it along, we have already started drying tomatoes. Our own harvest has been horrible this year so most of these are from our CSA, Red Earth Farm. One of the great pleasures of fall is the smell of tomatoes drying in our dehydrator, and later in the season, of New Mexico and Poblano peppers. Nothing smells more like fall to me than the rich aroma of drying peppers, with the exception I suppose of burning leaves.

I'm surprised some edgy entrepreneur isn't trying to market 'essence of drying peppers' at about $500 an ounce. Soon I'm sure. In the meantime it remains something to be enjoyed by everyone for very little cost; a dehydrator and some good New Mexico/Anaheim or Poblano peppers. Last year we also dried so Cayenne peppers. What a rich hot pepper that created.

I suppose you could also say this is really about conservation. As much as we can we like to use nature's produce, even the weedy Epazote that Jerene picked today, we also like the idea of not being wasteful. That's where preserving comes in. We tried our hand at canning and freezing many years ago. But neither the effort nor the results seemed worth it to us. Given the extremely high quality of stone fruit this summer though I have to say there is some temptation to can some peaches. In the meantime though we can definitely preserve with our dehydrator.

With peaches and tomatoes, not only are you preventing waste by preserving, but you're also preserving summer. In the cold and dark of winter the warmth and light the summery tastes of dried tomatoes, or canned peaches, can't be beat. We used to grow an Oriental green called 'Green in Snow.' The sundried tomatoes maybe should be called 'Summer in Winter.'
Posted by Ken Januski at 1:57 PM