Painting at the Speed of Warblers 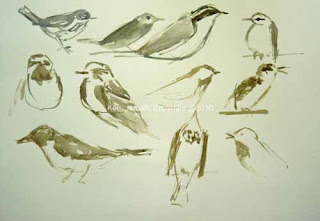 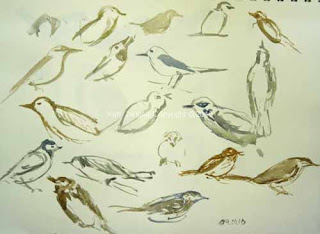 Wood warblers are moving through again on their southbound migration, staying still for all of a split second before directing their attention or perhaps their entire body to a new potential food source. I've written about this before. Their quick movement, often hidden behind foliage, makes identification difficult and sketching almost impossible.

And yet I can't help but want to get them down on paper. So today I returned to an old trick: sketching while watching 'Watching Warblers' by Michael Male and Judy Fieth. It's a great film to begin with but it's also very good for practicing on warblers. The reason is that they move just as fast here as they do in real life. The main difference is that these are pretty much out in the open and you can practice one species after another.

I'd been wanting to try them in watercolor so that's what I did today. I knew I wouldn't begin to have time to consider color though. I know this seems like a crime given the spectacular colors of wood warblers but that wasn't my concern here. I just wanted to practice getting down their shape. So I mixed up one color from Ultramarine Blue, Burnt Umber and Raw Sienna. That was enough to work with it.

To my surprise I found I liked this medium better than any I've yet tried for sketching warblers. The speed of the brush, a Winsor and Newton No. 7 series, number 1, seemed equal to the birds. Finally I felt like I found something that might have a chance of keeping up with the birds.

I think part of this, as I've mentioned in previous posts about 'painting with a brush', is that a good brush is a wonder of a tool. It can make fine lines, broad areas of tone and color and everything in between. In one nanosecond it can make the line of the bill of a wood warbler and one nanosecond later it can be used broadly to create an entire wing. It can do the spot of an eye, then instantly the entire head above it.

I'm not going to identify the warblers here. Some may be recognizable, and maybe most not. I'd guess there are about 20 species portrayed. But the important thing I've learned is that it might be possible to try this setup in the field when sketching warblers from life. It will still be difficult because I need to hold water, sketchbook, brush and binoculars all at the same time, with just two hands. But I think it's worth a try. 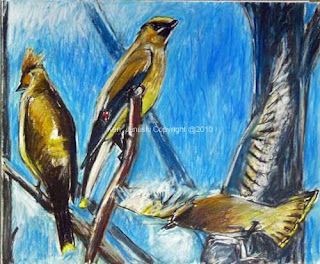 I also wanted to show the final version of the Cedar Waxwings pastel. It's gone through many changes only to end up back pretty close to the original version.
Posted by Ken Januski at 4:04 PM