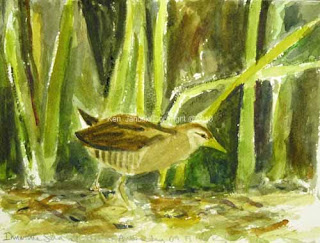 Though we did have a wonderful vacation in West Virginia, the birds were a bit sparse as I said in last post. Not that I'd want to give up the closeup view of the Ruffed Grouse, which I might have forgotten to mention in last post. In any case we decided to take advantage of yesterday's beautiful weather and do some brief birding at the small wetlands at our nearby arboretum.

Since we didn't get there until 11:30 we didn't expect to find much. But we ended the day with about 25 species, almost 50% of our number from a week in West Virginia. It brought home to me how spoiled we are by all the good local places to bird.

If we needed anything to symbolize that thought we surely got it with our last bird of the day, an immature Sora, the first Sora we've ever seen in Philadelphia. That's it in the watercolor at top.

This sora showed a different difficulty you can have in sketching birds - when they're at the limits of your optics. I can't recall offhand but I think my scope is about 28x. That just allowed me to see him buried in the dark of the shore and reeds. He moved around far less than warblers but he was just too far way to see well. The sketches below are the best detail I could get down. I had thought maybe I could use the photos I took for further reference. But since my camera is only 18x all they show is a pixellated area that might or might not be a sora.

So what I've done in the watercolor is mainly based on memory. I have made the chest area maybe a bit dark. The most striking thing was the innocent look of the face that I think one sketch shows. My online friend Nick Derry, whose link is at right, has shown in his recent paintings how really full, rich work can be made from brief field sketches. So I hope to use that example to do something with this great opportunity. 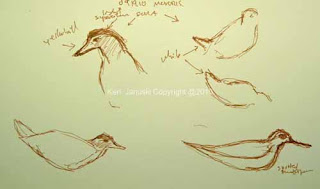 That bottom right sketch by the way is not a sora, but a Solitary Sandpiper, one of four shorebirds that we also saw. 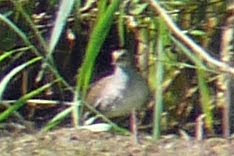 In looking through my photos a few days later I realized that I did get one or two semi-recognizable photos of the sora. One is above.
Posted by Ken Januski at 10:19 AM