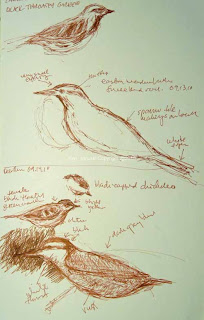 A week in a high mountain valley. Hemlocks, hickories, maples, even a Devil's Walkingstick right outside the cabin door. A perfect opportunity for seeing and sketching birds right? That's what you'd think. But we didn't see a single bird outside our cabin. For all our birding in the area we saw less than 50 species.

This really was a surprise. I think it just indicates that we've been birding areas with higher than normal numbers of birds for years. Perhaps this sparse distribution is really more indicative of what most of the country is like.

In any case we were lucky enough to be in a place where Black-throated Green Warblers bred. At least some were still around and I was able to get quick glimpses of a couple and then get them down on paper. Red-breasted Nuthatches, Black-capped Chickadees and Eastern Meadowlarks also breed there and all showed up long enough for me to also sketch them on the sheet above.

The Meadowlark stayed still for the longest amount of time and was probably the most exciting to draw. But I was also happy to feel that I was finally progressing in my ability to draw live wood warblers. 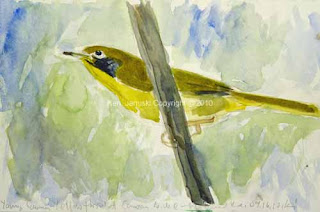 Our last day there brought showers and eventually thundershowers. So we spent the last afternoon indoors. Earlier that morning as well as the previous night I'd seen a mystery bird that looked much like a Common Yellowthroat, which were common in one area we birded, but had a touch of blue and black on face. It wasn't the typical male mask. But it couldn't be a Mourning could it? Finally I realized that it was a young male, whose facial pattern looks almost blue-black. I'd taken some photos the morning of the showers and so apent part of the afternoon indoors doing this quick watercolor while looking at the photo in the camera.

My wife thinks the bird is too thin, not full enough. But I think this is how he looked, stretched out, probably looking for food. It is surprising how differently the same bird can appear in different circumstances. In any case I was happy to be able to further along my attempts at Wood Warblers. Soon they will be gone until next spring. So I need to get as much done as I can.
Posted by Ken Januski at 12:08 PM