The Urge to Abstraction 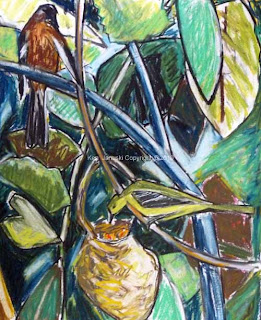 I've now done three works based on the little field sketch of the Orchard Oriole on nest. As I did so I let the urge to abstraction have free rein.

What is 'The Urge to Abstraction?' I just made the term up but I wouldn't be surprised if it already exists as an art term. For me it means moving away from an attempt at full verisimilitude to something more expressive in both form and color, maybe even in brushwork, texture and pattern.

Since it's been a very long time since I studied art history in school I have no idea what might be taught now. I'm assuming things haven't changed. Perhaps they have. In any case realism, particularly photographic realism, is only one form of visual art, regardless of subject. Since I've taken up bird art I've tried to be somewhat accurate in what I portray. I don't knowingly put a Mallard bill on a Forster's Tern. But I'm not a slave to photographs either.

If you look at the history of world art you see how much art has been representational without being realistic. Think of 'folk art', 'native art', Oriental brush painting. There are many, many examples.

I think there are probably very many reasons for this impulse to abstraction and I won't begin to enumerate them. I'm an artist not an art historian nor an art theorist. The reason I even bring it up is that as I've worked on my Orchard Orioles I've found myself eager to be somewhat abstract. The advantages to me are a heightened sense of color, shape, harmony of shape and color, etc. There are similarities to music. Music can be thoroughly expressive without having a single lyric. So can art. And I think it's that expressiveness that I'm seeking.

The pastel at top, which I'll probably do at least some more work on, is the last in a series of three. I showed the first earlier this week. The middle version is below. 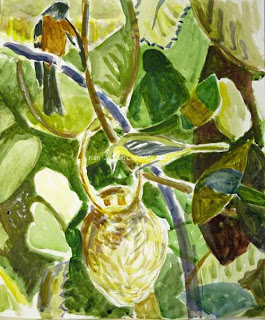 After I'd done the watercolor above I realized that it was heading in the direction that I wanted but that it still seemed a bit amorphous, not fully formed. So I thought a third version in pastel might allow me to push the abstraction further and to simplify it. Charcoal and pastel seem to lend themselves to simple, bold statements. Often I find that simplification is the answer. I'm not sure I've quite reached that here. But it's heading in the right direction.

I believe it is expressive, but still keeps the original subject of two Orchard Orioles, deep in light dappled foliage. I think that this is type of abstraction is where I should continue to develop my work. My history in art is one of following the urge to abstraction. I've sublimated it during four years of drawing and painting birds. But now that I feel somewhat comfortable with them I think that I'll continue to follow the urge to abstraction.

I'm writing this in the hopes that whoever does read it and wonders about my varying 'styles' will understand why I place such emphasis on the abstract. Really it is just the expressive.
Posted by Ken Januski at 12:15 PM