Hurricane Irene - Art Before and After 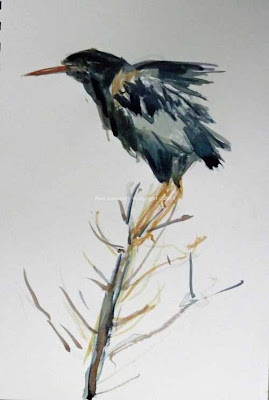 Yesterday when we prepared, as best we could, for Hurricane Irene's impact my main thought was WIND. Rain could be so strong as to flood our basement but wind could both bring down trees and cut our power and bring down trees on our house or car. There is a huge Silver Maple in a neighbor's yard. I've always preferred to have trees than not, unlike many of our neighbors who seem to consider the leaves a nuisance. But with ground that was already saturated with record-breaking rain, 6-12 inches predicted and winds of up to 70 mph I wondered just how stable that maple was.

So wind was on my mind. I remembered a photo I'd taken last May of a Green Heron landing in a far tree in the wind at Magee Marsh in Ohio. It seemed like a good subject for a 15 minute flash watercolor. It's at top. Due to rain and distance I really couldn't see any color - just some varations in blue-gray.

Yesterday was so dark that the light just wasn't good enough to undertake anything major. And of course we never knew when we might need to drop everything.

Eventually the boredom of waiting for the storm took over though and I started something a bit more developed based on some photos of an Ovenbird from a number of years ago.

Oddly we never saw much of the anticipated wind yesterday. I was up very late and still didn't see signs of a really strong wind. Today though, now that Hurricane Irene has been downgraded to Tropical Storm Irene, the wind has really picked up. The recently trimmed Silver Maples outside the window are whipping around and the panes in the window are rattling. 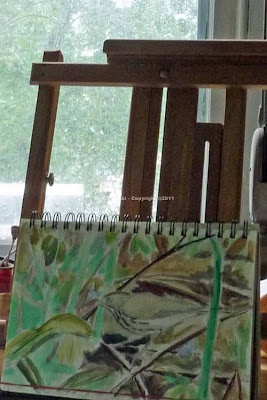 It really LOOKS more dangerous today. The photo above shows the early stages of the ovenbird watercolor, which I may or may not continue. It's really not very inspiring at the moment. The photo also shows the maples outside my window. Unfortunately it doesn't really show how the limbs are being whipped around. And the bird feeder attached to the window is full of food but empty of birds. I bought new bird food on Friday and I don't think I've seen a bird since.

Hurricanes do odd things. Ocean birds are being reported all around, having been blown off course by Irene. And the local birds? Maybe they're just hunkered down, waiting for this wind to end.

It's been an eventful week for nature. One day the floor is moving thanks to a 5.8 earthquake. A few days later we're preparing for a hurricane and then a tropical storm. Cape May where we vacationed just 10 days ago just had an evacuation of 750,000 people. When sun and normal weather returns it will be like a visit from a barely, recognizable stranger. 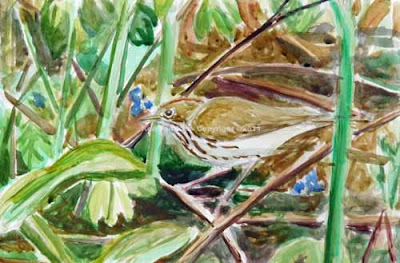 After I posted this I realized I needed to try to salvage the ovenbird watercolor. This is done now. It could use more work but it's on sketch paper not watercolor paper. So it's time to leave it be and save any future versions for good watercolor paper.

Love the Green Heron piece. It speaks wind. Hope Ms Irene didn't clobber you too badly. We barely got anything.

Thanks Pam. I did check your blog and was surprised at how little affect Irene seemed to have there. I guess it didn't really have much affect until it got north of you?

I have to say I never actually prepared for a hurricane before. Fortunately we had no problems here at all though there is significant flooding less than a mile away, but a few hundred feet downhill to the overflowing Schuylkill River. It looks like inland flooding really has had the most significant impact.

Years ago when I did a fair amount of flyfishing I remember reading how a hurricane from 50+ years ago had devastated streams hundreds of miles west of here, an area you'd never think would be impacted by a hurricane. Ever since I read that though I realized how widespread their damage could be.

The worst thing: it's very early in hurricane season!