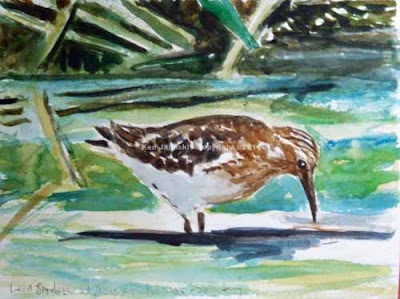 When I began this blog about 3 and a half years ago I used one of my first bird paintings as the header. Some of you may have noticed that the header has changed. And about time some might say! Three and a half years is a long time in internet time. But internet time can also be a harsh, and foolish, taskmaster. Who wants to try to keep pace with internet time? I'd rather have a life.

The first header was of a Blackburnian Warbler and so is the new one. I'm quite happy with the last reduction linocut so I wanted to showcase it. Since it's also of the same bird it seemed like a good idea to make the switch.

In a sense the two works show the beginnings and end of a journey. The early watercolor was one of my very first bird paintings. In it I think I stayed closer to abstraction than to realism. I liked the boldness of it but I also felt guilty about not knowing enough about the bird to stay true to it. Five years later I feel that I now know quite a bit about portraying birds. So the new print to me seems a happy combination of abstraction and realism. That's what I wanted when I started with birds and I think I've accomplished it.

In any case this explains the new header.

You may not have guessed it but the multi-color reduction linocut was a lot of work. I totalled up all my hours and they're almost 50. After such intense work it's nice to do something less demanding. So I've been out field sketching, taking photos and doing small studies based on both.

The small watercolor at top is a Least Sandpiper, based on field sketches and photos from Morris Arboretum last weekend. I still haven't gotten free, or accomplished, enough with watercolor for my work in it to be a successful blend of realistm and abstraction like the linocuts. But I keep working and playing at it. This is one such attempt.

Today was a cool morning for a change so I took advantage of it and took a lengthy walk along the Wissahickon Creek in Philadelphia. 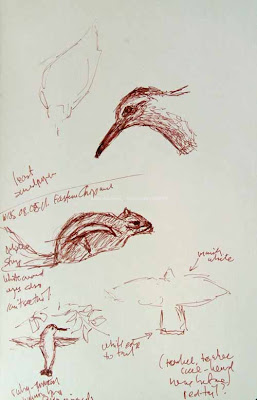 Above is a field sketch of a Least Sandpiper from last weekend as well as some birds seen today: a Ruby-throated Hummingbird, Eastern Chipmunk and Red-tailed Hawk. Only the chipmunk sat still for more than a split second. The other two birds were in flight. 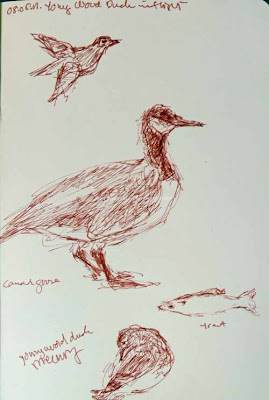 Above a Canada Goose from this morning, along with a Wood Duck taking off as I scared him out of water, a less shy Wood Duck preening itself and a trout in the creek. 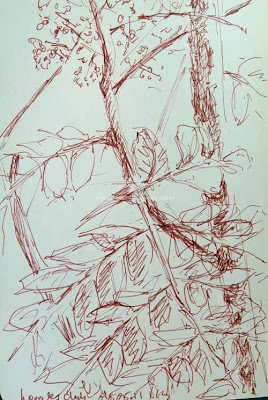 Finally the subject of my other, very occasional blog, Feeding on Devil's Walkingstick
. These prickly shrubs are just starting to form flowers. Soon they'll bloom, then form berries, then be inundated by birds, mainly warblers and thrushes. I just wanted to do a quick sketch of one as the flowers start to form.
Posted by Ken Januski at 4:21 PM