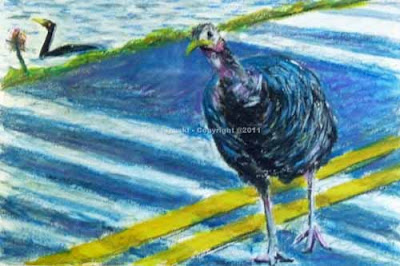 When we visited Metzger Marsh in Ohio near the Ottawa NWR last May we abruptly stopped one day as we saw a Wild Turkey along the road. As he seemed oblivious to us and let me sketch and click away we began to wonder just how wild he was. Across the road in the Neocolor II Crayon drawing/painting above is a 'yacht club.' Was he the official mascot?

I'm sure not. But there was something oddly tame about him, as though he was quite accustomed to humans. When we see Wild Turkeys in the wild they're gone at the first recognition of us, often from 100 yards away or more.

There is a small canal that runs along the 1-mile road out to Lake Erie. We found all sorts of warblers in the woods along the lake last May. In the canal were numerous egrets and herons, and I guess a Double-crested Cormorant or two. It was only when I got home and looked at my photos that I noticed a picture of the turkey with a cormorant in the background. This is not it. It's a composite of various views. But I've always been struck by the odd juxtaposition and yesterday finally decided to do something about it.

As I mentioned above I used Caran d'Ache Neocolor II water soluble crayons. I bought them before our trip to Ohio in the hopes that I'd use them to add color to my field sketches. I've tried watercolor pencils in the field and gotten nowhere. Pretty much the same with Pitt Artist's felt tip pens. So I thought I'd add crayons to the arsenal.

I never had the occasion to use them on the trip but I have used them in the studio. The nicest thing about them for me is that it's easier than with most media to paint light over dark. Often, as in watercolor or felt tip pen, you just can't get a clean light color over a darker one. And given my penchant for changing my mind as I go along I like to have that option.

The other nice thing is that these are water soluble. So you can also use a wet brush and turn the drawing into something like a watercolor. Then you can go back on top with the crayon to add vibrancy or detail.

More than anything I think this type of drawing/painting serves as a study. I can work out an idea and get some feeling for whether or not it's worth more development in another medium.

I'm also using the hardworking Stillman and Birn Gamma sketchbook for this. They really are sketchbooks and at least this part of the series, Gamma, is not meant for all the water I put on it. Still it doesn't break down. It warps a bit but not enough that I can't work on it.

So for me the combination of sketchbook and crayon work very well for my artistic experiments.

Ken,
The Alpha (white) and Gamma (ivory) Series are 100 lb. (150 gsm) and are rated for dry media and light washes. For heavier applications of wet media we recommend our Beta (white) or Delta (ivory) Series which are 180 lb. (270 gsm). I would like to send you a sample of one of these. Please see our website for available sizes at www.stillmanandbirn.com Please contact us with your preference and shipping address at info@stillmanandbirn.com.

When I bought my first, and only so far, sketchbook it was the Gamma. I thought that pencil would be my primary medium with perhaps a little wash added. So I went with Gamma.

But I soon found that pencil was just the start and soon I was adding more and more wash and/or crayon. So I'd decided to try either Beta or Delta for my next sketchbook. I'll contact you regarding that.

I am happy to write of my experiences with media that works well for me. So it seemed to me to make sense to mention it once again, even if I'm not really using it for its intended purpose(a common fault of artists I think!).