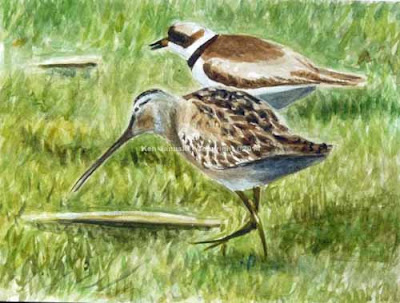 I suppose in any field you hear a truism and assume it is true until someone tells you otherwise. I've always heard and read that Long-billed and Short-billed Dowitchers could really only be told apart by call. But shorebirds are not my area of expertise. Perhaps if I'd seen more of them I'd know this isn't true.

In any case the shorebird workshop mentioned in the last post spent a fair amount of time showing how to differentiate them. But even after all that when I saw the mystery dowitcher that I spent an hour sketching and photographing I thought it was a specific race of a Short-billed Dowitcher.

As I looked through my photos though I realized that one showed a longer, thinner bill than is often found on a Short-billed. When I looked at 'The Shorebird Guide' I found this regarding molting adult Long-billeds:

The gray head with salmon wash on neck and going into belly was one of the most striking parts of this bird. That, the long bill, the rich colors of feathers, and the 'swallowed-a-grapefruit', hunched look all make me think this was a Long-billed. And I'm sure if I remembered everything from the class I could cite a couple of other reasons.

In the long run it doesn't make much difference. But for me part of the enjoyment of birding is trying to make difficult IDs like this.

One side note: hardly had I started this than our whole house shook. The cats appeared in the hallway with wide-eyed looks. Yes it felt just like one of those earthquakes I used to experience in California. And it was: a 5.8 one centered in Virginia and felt all the way to New York.

I think I wrote a few months ago about how the study of geology humbles you. And to actually feel geology is probably doubly humbling. It's so easy to think that our lives and what goes on in them, including the most idiotic headlines in sensationalist news, are what's important. Then the ground wiggles under you and you have second thoughts.