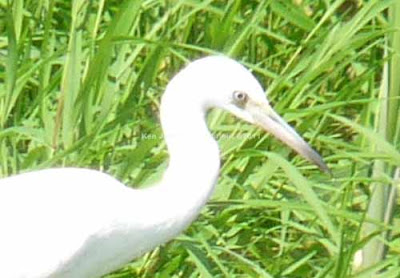 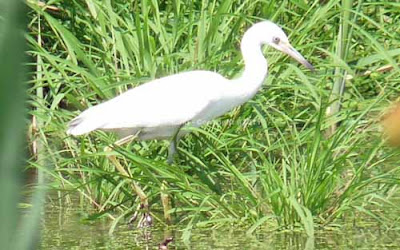 Every once in awhile I'm out birding and sketching and am not sure about the ID on a bird. Such is the case above. The pale bill is the first thing that threw me. I'm used to seeing Great Egrets at Morris and assumed that's what it was. But the color of bill and legs seemed wrong. Size is always hard to gauge without something to compare a bird to but it seemed small.

When I got home and consulted my guides it seemed almost as likely to be a juvenile Little Blue Heron as a juvenile Snow Egret primarily due to color of bill. But the actual shape of bill, and the greater rarity of a Little Blue, make me tend toward a Snowy. I've posted a query to the Audubon PA rare bird listserv and am posting the photos above so that anyone who reads that post can check these photos. 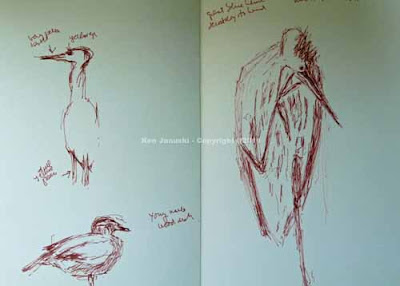 I was primarily interested in doing field sketches at Morris but I didn't get far with the two mystery egrets. Only toward the end of my visit did I realize that there were two. Most of the day I was looking at just one but it was just too far away to get a good look at in scope, and it rarely stood still. The sketch above shows it as well as a juvenile male Wood Duck and a Great Blue Heron that was scratching his head.

Below a few more field sketches. First a Solitary Sandpiper, with a bill that seemed suprisingly sharp and long, a Twelve-Spotted Skimmer and the same Great Blue Heron. 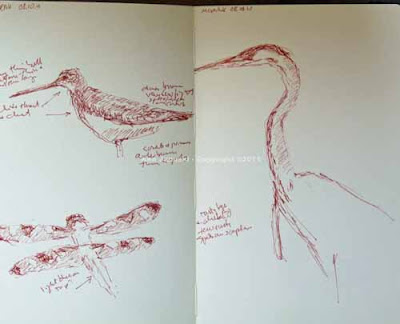 And second: a female House Sparrow, sketched at home before heading out, another 12-Spotted Skimmer, a Northern Rough-winged Swallow, a Painted Turtle in two poses, and a Great Blue Heron just after it flew over my head. 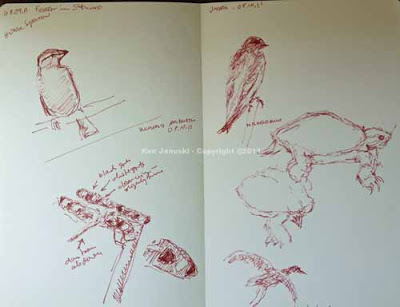 And finally another Odd and End. This is a Caran d'Ache Neocolor II crayon with wash based on some photos of Common Moorhens seen at Metzger Marsh in May, 2011. 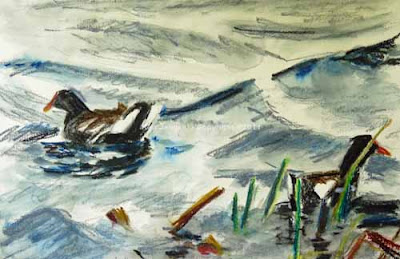