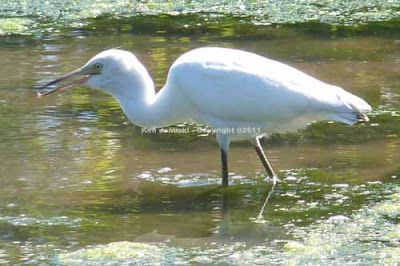 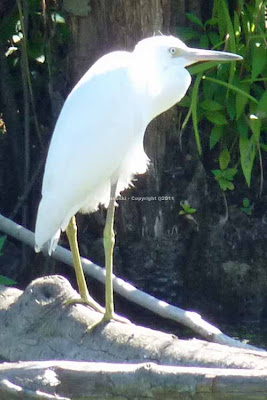 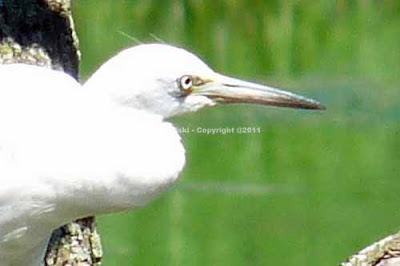 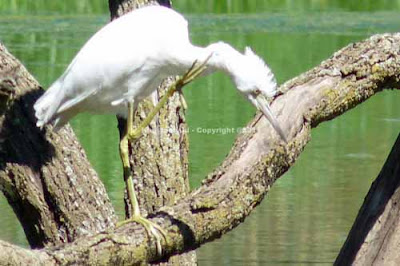 Errands brought me into the vicinity of Morris Arboretum this morning so I had to stop and take a look at the mystery heron/egret. I'd pretty much decided it was a Snowy, based mainly on the markings under the eye, the typical poses which seemed more like a Snowy and the relative rarity of Little Blues.

I took numerous photos and did some more sketches. While there I ran into some people who told me a local birder had called them immature Little Blues. I wasn't convinced.

But when I got home I did pull out one more guide to look through. This one, the Stokes, showed a photo much like what I'd seen. And seeing it again it was hard to deny that the legs were one solid color and that was more green than yellow. Also the bill does seem broader and thicker and bends down more than I think is true of the Snowy. Things that leave me with some doubts though: the markings of bill under eye seem more like Snowy, and the poses seemed more like the many Snowies I've seen than like the few Little Blues. Nonetheless I think immature Little Blue is correct.

In spite of many views of the last post I heard nothing from anyone on PA rare bird listserv with their thoughts. Perhaps with these additional photos. AND they have: a number of people have confirmed this as an immature Little Blue. Thanks to you all for your emails. 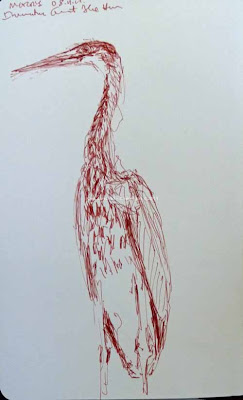 Above a sketch of an immature Great Blue Heron, which has been at Morris last couple of days. 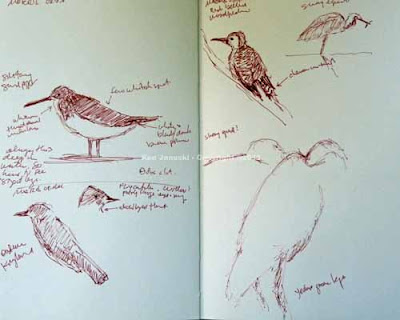 Another sketch of the Solitary Sandpiper, an Eastern Kingbird and just the start of what I'd guess was a Willow Flycatcher. Also the Little Blue, which didn't sit still for long, and a far-off Red-bellied Woodpecker. 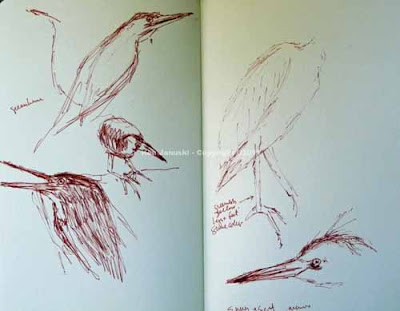 Finally a Green Heron, one of two I saw today, and more sketches of the immature Little Blue, which just wouldn't sit still.
Posted by Ken Januski at 2:00 PM

Coinicidentally, we were out today in Toronto and did see what we think was an egret. You can see how it differs from your bird here: http://minouette.blogspot.com/2011/08/urban-wetlands.html
It's got a different neck and different coloured legs.

(I'm basing this on what I can glean from the National Geographic Field Guide to the Birds of North America).

I believe what you saw was a Great Egret. They are the egret that I see most often.

What was interesting about the birds I saw was their pale bills. If you look at your NatGeo guide I think you'll see that both immature Snowy Egret and immature Little Blue Heron are white with pale bills. That's what threw me. I wasn't sure which one it was. But Little Blues have all dull green legs and I think their bill is more wedge shaped than the Snowy Egret.

So that's finally what made me decide that they were immature Little Blue Egrets. It was a learning experience!!