Fieldsketching Shorebirds around Cape May 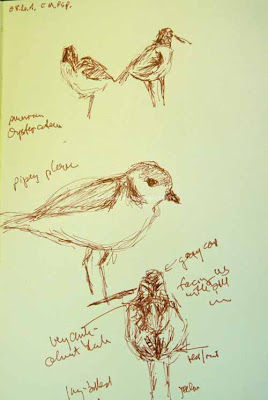 It's been quite awhile since we took a birding workshop. We learned to bird taking them at Pocono Center for Environmental Education about 15-20 years ago. The last we took was at least 8 years ago, a week long course on Spring Migration at Cape May Bird Observatory.

But we've been getting more and more interested in shorebirds and CMBO was offering a course, 'Shorebirds With the Man Who Wrote the Book' last week. The 'Man' is Michael O'Brien, and the book is 'The Shorebird Guide.'

We couldn't have made a better choice. Michael, along with his wife, birder and artist Louise Zemaitis, is a wonderful and extremely knowledgeable birder and teacher. At the end of our three day course we finally feel somewhat comfortable with shorebirds. More than that we both feel that we've learned how to look at them, so that we can figure out what something is when we see it. 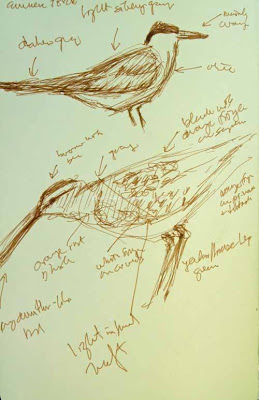 That said almost as soon as the course was over we were faced with a bird that looked exactly like a dowitcher, more likely Short-billed than Long-billed, but behaved much more like a Pectoral Sandpiper. Last night as I looked at my guides, photos and field sketches I still wasn't sure and started to lean more towards a Long-billed Dowitcher. That's really not important though. What I think we both find so exciting is that we are now able to look at a shorebird and figure out how to decipher what we see. The sketch above includes the mystery bird below and a Common Tern above. One bonus about this week was that terns were included free. Everywhere the shorebirds were we seemed to see some terns as well. They are also pretty unfamiliar to us so I spent a lot of time sketching them.

At top are some of the first birds we saw: two American Oystercatchers, a Piping Plover, and a Long-billed Dowitcher, facing away but with his head turned 180 degrees and buried in his mantle. As you can see I spent much of my time trying to sketch and annotate diagnostic field marks of the various birds.

We did see a wealth of birds. I'm amazed that I was able to sketch so many of them during the course. Below two sketches of a distant Marbled Godwit with a Least Tern in between. 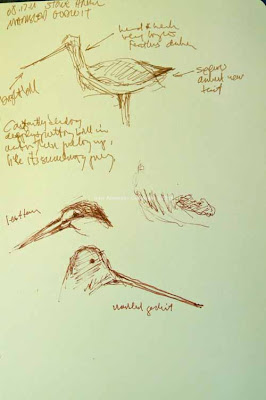 Next a very small Osprey which seemed it must be an immature, except that his plumage indicated adult. And with him a Caspian Tern, that stayed just long enough for this sketch. 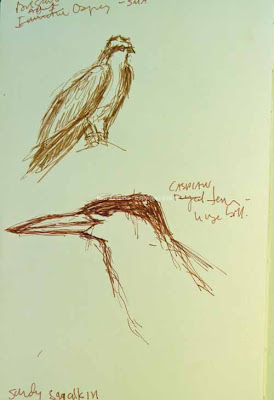 Next an immature Great Blue Heron drying his wings. I skipped most herons and egrets I saw this trip but this pose was too striking to pass up. 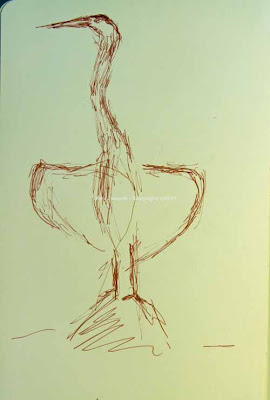 Now some young Piping Plovers, almost invisible on the sand of Stone Harbor. One of the surprises of this part of the trip was the discovery of Loggerhead Turtle tracks, seemingly there to lay eggs. A naturalist with the group recognized them. The local naturalists said they had no knowledge of any sea turtles ever trying to lay eggs in this area. I've not yet had time to read up on them or to find out whether this is a real nest or a fake nest, which is always a possibility with Loggerheads I guess. Local naturalists are pursuing this. 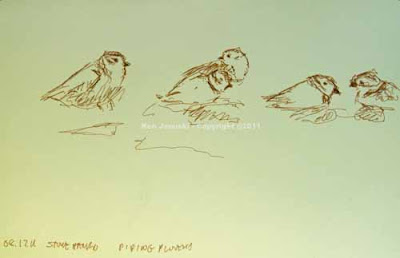 Moving from sea turtles to a Ruddy Turnstone with his head stretched out looking for food, and a juvenile Western Sandpiper, complete with notes as to why this is a Western and not a Semi-palmated. 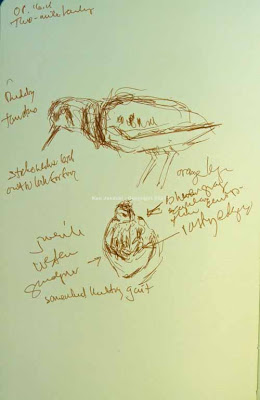 A Short-billed Dowitcher with Least Tern below. 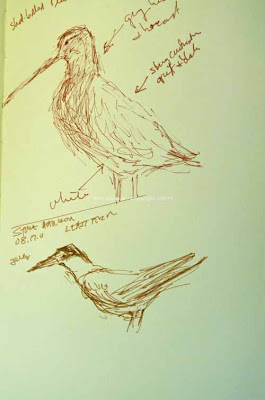 Two of my favorite sketches: a juvenile Semi-palmated Sandpiper with bright, fresh plumage and a distant Whimbrel who raised his wings momentarily. One of the things I love about field sketching is being able to capture moments such as this. The only way to do it though I think is with constant practice. The more you sketch the better you get AND the more chances you have to see something like this. As I've said before it can easily become addictive. 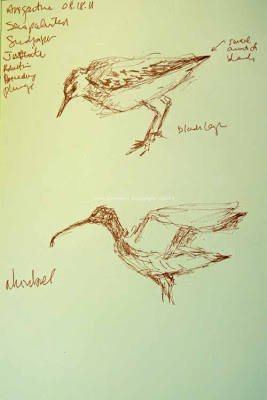 And finally two White-rumped Sandpipers and a Sandwich Tern, both birds we've never seen before. 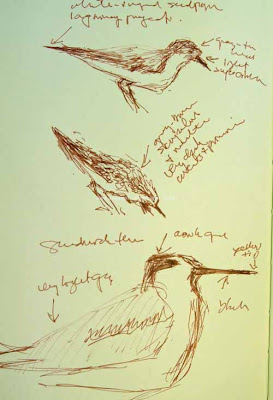 Our vacation was short, just three full days and two partial days. But it was one of the best ever. Fresh, invigorating ocean breezes, new birds, a very knowledgeable and effective teacher and many field sketches. It's hard to ask for anything more.