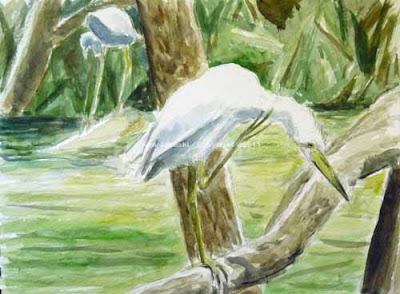 Sometimes when I struggle with identifying an unusual bird I like to do some sort of art work that solidifies what I learned about the bird. Often though I get seduced along the way by other factors. In this case I liked the idea of showing a second Little Blue a bit further back. That meant less space for the primary bird and thus not much detail So I never really did much detail on the bill. And the greenish legs, a diagnostic characteristic, get lost a bit in the overall green of the painting.

So it has ended up being a more artistic painting than a scientific one. Still there are elements of both. And sometimes you just need to get started. With this done I wouldn't be surprised if I eventually try a few more of this subject.

Finally I like the idea of commemorating this unusual event for Philadelphia. I'm happy with that. Now I just need to do another, slightly more vibrant painting.

This painting by the way is much more satisfying than the two I did of the White Ibis at Tinicum last month. I think that's because of the effort spent in just identifying the birds. Also I never saw the birds like this. It's a composition of other real life scenes. It's almost always more exciting to try something like that.