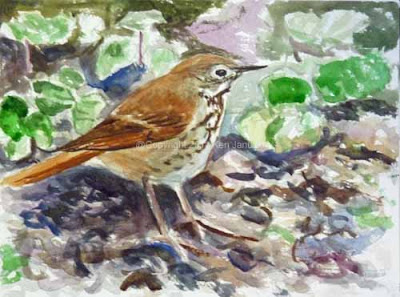 So just as I finish my latest post about taking liberties with the birds I see and paint I hear a neighbor yell out to another neighbor that a bird has just flown into his window. When I went over to check I found a beautiful Hermit Thrush.

Actually we'd seen our first Hermit Thrush of the fall yesterday at the Andorra section of Fairmount Park in Philadelphia. They're just starting to move through and some may stay. We've been lucky enough to have them as visitors during the last couple of years.

I thought about bringing my camera or sketchbook over to my neighbors but thought it more important to get there and check the health and ID of bird, not that I would have had much of an idea as to how to help it. When I got there the bird was standing up. Soon he flew up a few feet to the top of a garden fence. He just sat there for all to admire, though I'm sure that wasn't his intention. Just as I thought about heading back home for camera or sketchbook he flew.

But he was a beautiful bird. So I felt like doing some sort of visual documentation. This watercolor is based on a photo of one that was in the backyard early this spring. You can tell it's early due to my highly abstracted version of Gill-Over-The-Ground.
Posted by Ken Januski at 5:09 PM

So glad to hear that the thrush recovered! I always dread that sickening thud on the windows.

Your watercolor "tribute" is great. A dear friend of mine who is an artist in New Jersey is always pointing out green/purple/orange as a great color combination and I think she's finally gotten through to me because that was the first thing I noticed about your painting (after the bird, of course).

I am envious that you had a thrush in your backyard last spring. I have always dreamed of living somewhere where I could have a meadowlark singing in the front yard and a thrush singing in the back yard!

I think we've had Hermit Thrushes in our backyard for about two years now, fall and spring. Since we have such a small backyard it always makes me wonder if it could possibly be the same bird.

We had a Ruby-crowned Kinglet for 3 winters in a row I think. They rarely stay in winter so that really made me think it was the same bird. Unfortunately we haven't seen him for a few years.

I think my wife would be just as thrilled as you if not moreso to find a meadowlark singing in the front yard. But there's not much room in the 20 square feet or so that are there! In fact I don't think we've ever seen one in Philadelphia. Since we both grew up in the Midwest we really miss them.

But as I recall you're getting plenty of birds in your new home. And that lovely mountain view!!