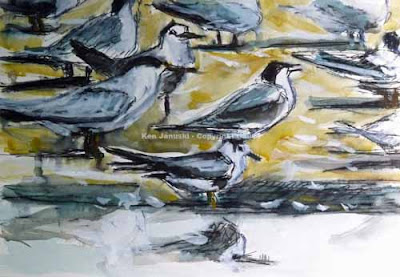 While waiting for my computer to reboot after finishing the painting above I leafed through a new issue of a birding magazine that included some photos of Common Redpolls. I was reminded again of how beautiful birds can be. You can see why many people desire to represent them as accurately as possible.

Of course one can easily argue about what is meant by accuracy. I've done it at other times. But for now I just mean something that resembles photos but doesn't mimic them. Some would say it emphasizes a scientific approach to birds over an artistic one.

The painting at top is pretty much in direct contradiction to this notion. I've taken great liberties in this ballpoint pen, watercolor and gouache painting. Why? Well I can't really say except that that is what I wanted to do. I wasn't interested in portraying the birds, especially the Black Tern, accurately.

For me the problem with this naturalistic type of art, at least if I'm doing it, is that the bird often seems dead when I'm done. Not always. I've done some paintings that are fairly naturalistic and I'm happy with them. But they're not my natural inclination. That's not to say that other artists don't manage this style wonderfully. But for me it rarely seems natural or true to myself.

When I think about taking liberties I often think of Matisse, and of the painting Tea in particular. I first saw this painting at least 30 years ago. But it still stays with me.

The painting combines abstraction, design, color, realistic portrayal all in one painting. And yet it doesn't at all look like a photo. But look at the way the dog scratches and the shoe of one woman dangles on her foot. Look at the sense of dappled light. There is a breath of life in this painting that is often missing from more scientific renderings.

I won't begin to claim that the small painting, really more of a sketch, matches the ambition of Matisse's masterpiece. But I think it may help explain my motivation in doing it. Sometimes an accurate portrayal doesn't seem enough. I'd like to do more. I'm sure much of this comes from my many years painting and loving what was once referred to as 'modern art.' 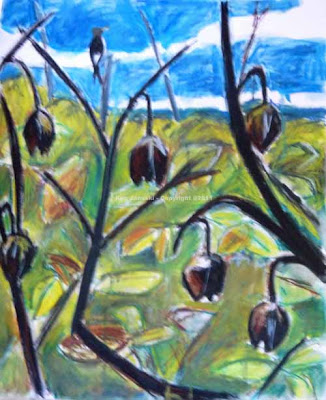 Above is another version of the Bladdernut and distant immature Red-headed Woodpecker. It is done in Caran d'Ache Neo-color II water soluble crayons, and a lot of water. I think it's very similar in motivation to the painting at top. In both instances I'm taking something naturalistic and using is as a leaping off point for something more abstract, more 'modern.'

It's very odd saying 'modern'. After all this term was first used more than 100 years ago. So it's not really modern in the sense of being new. But it is modern in the sense of coming out of that tradition. I don't claim that this tradition is better than a more realistic or naturalistic one. It's hard to deny the tremendous excesses that have come out of modernism and it's easy to understand why some might dislike it. But for me what is good, strong and true there is undeniable.

If I follow my heart in what I paint it more often goes toward naturalism saturated in modernism than anything else. I suppose another way of saying this is that I'm just trying to make what I see have some expressive power.

These two paintings are steps along the way to something more finished I think. Either or both may end up as paintings or prints. This is my way of moving in that direction. I've taken some liberties with realistic rendering and my guess there will be more along the way.
Posted by Ken Januski at 1:26 PM

I like this tern painting very much. It may not be scientifically accurate, but it is accurate in the fact that you capture the essence of the birds; it is clear what they are without having to record every detail. Plus there's such interesting movement, line, color, and composition. Certainly no dead birds here!

Thanks Gabrielle. I think you're the perfect audience! You've pretty much noticed everything I tried to do in it.

As I said in post I'm always torn between something like this and something more accurate in terms of detail. All in all though this is really what I love. And probably what I should spend most of my time on!!