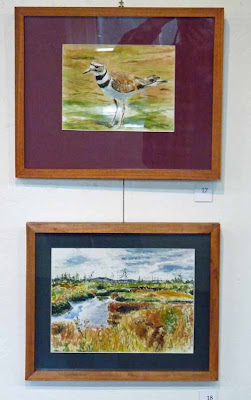 This is an unusual week for me. For a few days I'll have works in two shows at the same time. And both shows have acronyms. The first is MRAC, the Manayunk Roxborough Art Center. I've mentioned this show earlier. It will end this weekend.

Above are two works both watercolors, a kildeer seen at Morris Arboretum in Philadelphia, and the pond at Freeman Road Tract of the Canaan Valley NWR in West Virginia. We vacationed there just over a year ago. 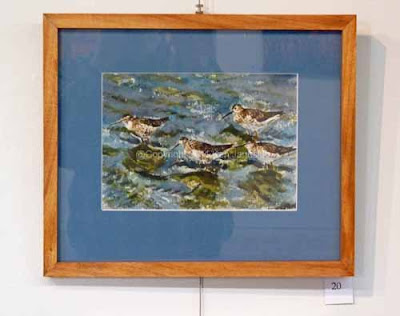 My friend Gabrielle at The Inner Artist asked if I would show any in situ photos. I'd like to but rules about not taking photos of other works limits me to cropping these photos so that only my own work is shown. Above is another watercolor of some greater yellowlegs seen at Heislerville WMA in New Jersey a year or two ago. It's in a slightly more abstract style. 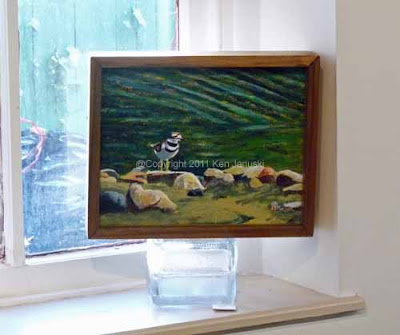 And finally my newest acrylic painting which I documented extensively here. I'm not thrilled with either the painting or the frame. But both were the first in a long time. I have to give MRAC credit for finding a way to display the oddly sized frame.

As I've mentioned before MRAC is a cooperative gallery only a few blocks from my home. It's over 50 years old and included some very talented local artists among its founders. One of them Walter Speight used the local neighborhood and landscape as the subject of many of his paintings.

The other show with an acronym is scheduled to open tomorrow, not a few blocks but another continent away. More on that later.
Posted by Ken Januski at 9:06 AM

I'm not even going to pretend I know how to analyse paintings, but I especially love the acrylic. Reading about how it came to be was educational as well as fun (for me), and finally seeing it framed is a treat. The colors and movement of the water are particularly pleasing. Wishing you well in next shows.

I'm glad that you like the acrylic and my long, drawn out postings on it. Whenever I post about a work in progress like this I hope that it will go smoothly and quickly. But sometimes things don't go as planned and I fear that readers must get bored to death as I try to finish the work. So I'm happy that you enjoyed seeing and reading about the entire process.

I might try another acrylic soon. But this time I may wait to show it until it's a bit more finished.

Thanks for your good wishes on the shows.

Ken, thank you SO much for posting these! It is always great to see an artist's creations go from ideas and sketches to framed art. Congratulations again on the dual shows.