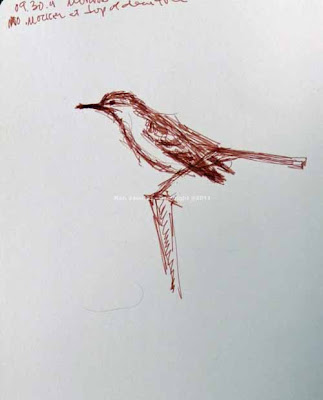 The flocks of American Robins and Northern Flickers we saw today during a brief walk at Carpenter's Woods should be enough to convince us that the season has changed from summer to fall.

But a visit to Morris Arboretum on Friday after dropping off my last piece for the group show had other signs: empty perches. There on that dead tree should be a Eastern Kingbird. That large dead tree over there should hold one or more Belted Kingfishers, Tree Swallows, maybe some Cedar Waxwings and possibly a Great Blue Heron. The smaller trees there in the pond should hold more Cedar Waxwings, some Eastern Phoebes and maybe a Willow Flycatcher or two.

But almost all of the perches were empty. Most of the birds that use them have gone. I did see a couple of Eastern Phoebes in another area and Belted Kingfishers and Great Blues can be around all winter. But the Eastern Kingbirds are gone for good I think, as are the Tree Swallows and Willow Flycatchers. Even though Cedar Waxwings can be found somewhere in Philadelphia most winters I've rarely if ever seen them here.

I think because I saw so few birds on Friday it really struck me that another summer has turned to fall. As I left one bird did take his place atop one of the dead trees, much higher than I usually see him. That is the Northern Mockingbird, seen in the quick fieldsketch at top.

The empty nest I refer to is my studio. I've spent the last few weeks working on my first acrylic painting in 20 years or so as well as making mats for watercolors and a frame for the acrylic. But acrylic and watercolors were delivered on Friday. 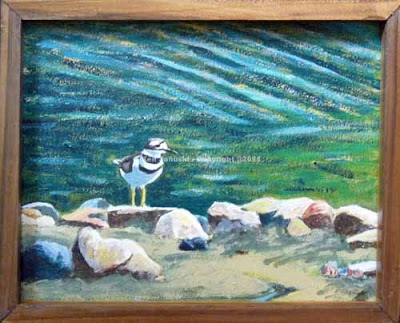 Now the studio seems empty: an empty nest. The photo above shows the finished painting as well as the finished frame. Due to complications like the size of the fence on my handheld rabbet plane, there is a much deeper lip on the frame than I wanted. So this looks a bit like a shadow box, something I didn't intend to make at all. But I convinced myself that it fit with the subject and kept it.

Once I put the painting in the frame the orange in the reflections at upper right looked positively garish. I decided I really needed to tone it down. So the final version is much more subdued than I originally intended.

It is proudly hanging in the 55th Annual Members Show of the Manayunk Roxborough Art Center. When I was much younger I had no interest at all in anything that had a tradition. That gave it no special cachet with me. But as I've gotten older I've developed a greater respect and appreciation for things with a tradition - like a show that has been going on for 55 years.

Part of this is probably just due to being older myself. But I think much of it is just a reaction against a throwaway culture. I once bought a used wooden woodworking plane that was from 19th century France. I didn't pay much for it. But it is functional and I love the idea of using the same tool that someone else did over 100 years ago. I like the sense of continuity and common cause and purpose.

I was particularly reminded of this while gallery sitting at the group show on Saturday. While there I noticed a plaque commemorating the original founders. Among them was Francis Speight!

Francis Speight you say? I'm sure not everyone will know him. In fact I had to search online to see if he was who I thought he was. And he was.

When I first moved to the Manayunk Roxborough area I was strictly an abstract artist. But over the years I kept thinking that this areas, particularly the hills and the view of the Schuylkill River below, needed to be painted. There was and still is an undeniable beauty.

As I investigated, informally and inexactly to be sure, I found that there were artists who had painted its beauty. One of, if not, THE best was Francis Speight. This painting of his is not much different from the view from our house if I walk a few 100 yards to get a view between neighboring houses and down the hill to the Schuylkill River. Cotton Street, the same Cotton Street in the title of the painting, is just a few blocks away.

So I've always, well for the last 10-15 years anyway, had a special appreciation for Francis Speight. To find that he was one of the founding members of the Art coop I just joined was more than I could have expected. It's a great honor to be part of such a tradition. Obviously this area was once a thriving area for the arts. Hopefully it will soon be so again.
Posted by Ken Januski at 6:03 PM

Congratulations on getting everything done and hung for the show! The killdeer looks wonderful in its frame, too.

You had asked earlier if I was familiar with the Manayunk Roxborough Art Center, which I am not, but I know the area. And you are right, it does have a beauty to it.

I understand what you are saying about tradition and using something that someone used a hundred years ago. I have an old recipe for Welsh Tea Cakes that was passed down through the generations of a friend's family. When I make them, I get a sense of the women before me making them over a wood fire (or probably peat or coal) and their families enjoying them then as much as I do now.

Will we get to see any photos of your art hanging in situ as it were at the show?

Thanks and glad you like the killdeer in its frame.

Every time I get out and walk around this area I think I ought to do this more. One of the things that brought us here was the beauty, especially the hills, rocks, and river below.

Glad to hear you understand about tradition. I do get the biggest kick out of being part of lengthy and worthwhile traditions. I've never had a Welsh Tea Cake that I know of, but now you've got me interested. Sounds appealing in the cold months that lie ahead.

I gallery sat for 4 hours last Saturday so had all the time in the world to take photos. But I just didn't think of it. Maybe I'll try to take some over next week or so before the show gets taken down. It's amazing how much work goes into getting ready for one and how quickly the show is gone, just like Thanksgiving dinner...........