The Problem with Redheads 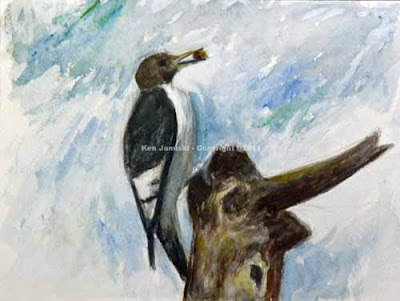 There are some birds that are bold and beautiful in nature that always seem to end up dead on canvas. The first I ran into was a Scarlet Tanager. That brilliant red and black is so striking in real life. But try to put it down in paint, especially from a photo, and it seems to turn to mud. Same thing with a Red-headed Woodpecker, especially with the mature red-maroon head.

I think the reason for this is that both birds are largely undifferentiated areas of full color, black, white and two types of red, an orange red and a maroon red. The black and white would do well in a graphic design but never seems to work as a painting. Though I've never seen a Cock of the Rock the paintings I see always look horribly dead, even given the bright orange red of the bird. There seems to be a similar problem with it.

I took quite a number of photos of a Red-headed Woodpecker in Illinois a few years ago. As is typical it was on a snag silhouetted against an undifferentiated blue gray sky. I could never convince myself to do a painting of it. The best I could do was a felt tip drawing that accentuated the trees and sky as much as the bird.

So it seems hopeless right? Well until you see this Audubon painting. What imagination, both in terms of formal composition and actual event portrayed. All of the potential problems of portraying a Red-headed Woodpecker are smashed to bits. As Julie Zickefoose says after seeing work like that other artists might just as well pick up their toys and go home.

Growing up as someone most interested in abstract art I could never quite see the appeal of Audubon. I also couldn't tell where he fit in with the likes of Picasso and Matisse. Many people seemed to have his prints or reproductions of them. He must be considered an artist of some sort. I didn't actually dislike him. I just couldn't categorize him. I think that's one problem with learning something when young. You tend to think things belong into the categories you've been taught about. Then you realize that sometimes they don't.

The more I've done bird art the more my respect for Audubon has grown. The amount of imagination in this Red-headed Woodpecker painting I find staggering.

The other artist I automatically turn to for something like this is Louis Agassiz Fuertes. Some birders prefer him to Audubon. Much as I like Fuertes I prefer Audubon. Fuertes seems to have done a number of versions of this bird. One is here. There are others that are somewhat more dynamic in composition but I hesitate to link to sites I'm not familiar with. I think the one shown here shows the problems I mention with a Red-headed. They are just so simple: black, red, white, often on a grayish snag against a blue sky. It's very hard to make an interesting painting out of that. Fuertes does a good job. But to me Audubon creates art!

For any readers who have come here via my post on the Pennsylvania Rare Bird List I think this post may help explain why I'm not that concerned with taking documentary photos of birds I see, even when they are rare. I'm always much more interesting in painting a lively portrait of the bird, one that combines accuracy and art.

All of which is a very long way of saying that the immature Red-headed Woodpecker that I found along the Wissahickon in Philadelphia on Monday was also there on Tuesday in the same location. The watercolor at top is based primarily on a photo I took on Tuesday.

The best way to find the area if you're not familiar with it is to look at the trail map published by Friends of the Wissahickon. Unfortunately you cannot see it online. If you have the map the bird is in a snag across the stream from Forbidden Drive right upstream of where Gorgas Lane trail meets Forbidden Drive. There is a large 60' snag that is clearly visible and hard to miss. If you don't have the map you can use the Google map at the FOW site. Unfortunately it's not easy. If you see Gorgas Park on the left side of the map center it on the map. Then keep enlarging it until you see a tributary stream feeding into the Wissahickon. That is Gorgas Lane trail and the snag is right across the Wissahickon. You can cross the bridge a few hundred yards to get closer but you can actually see it better from the Forbidden Drive side. I haven't been out today but may check again on Thursday or Friday. Since it was there two days in a row I hope it will stick around awhile longer.
Posted by Ken Januski at 10:28 AM