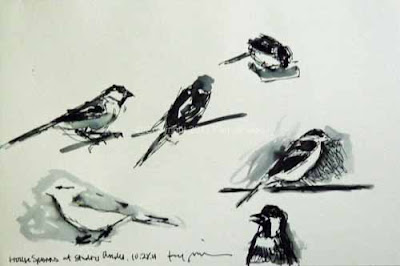 I knew that it couldn't be true -- 6 to 10 inches of snow this weekend for Philadelphia. It's still October. We often don't get snow until January! And yet that's the current forecast.

But the House Sparrows at my studio window feeder looked like they might be preparing for snow. The sketch above is based on sparrows at my window. When there are a lot of them feeding frantically I can assure you that they don't sit still for long. Most of the time they're fighting. Just as I start one another sparrow lands on or near him or her and starts fighting. Often I can only get one line down, like the breast in the female at lower left, before the bird is gone. I need to try to remember the rest of the bird. Or, wait until another bird takes a similar pose.

This may seem either silly or masochistic. But it actually is fun. You're forced to really think about how the bird is put together. For instance you may need to put a head on a sparrow, as I did at lower left. Inevitably some things will be wrong. But just as true is the fact that you might capture some sense of life. And you do get more familiar with the birds you're sketching.

For this I'm using a Bic 537R ball point pen. It's extraordinary how much the ink runs when water touches it. Normally this would be a catastrophe. But here I like it. It's a very quick way to change a drawing into a painting, or at least a wash drawing. And you never know what surprises you might get.

Just as the sparrows are winterizing I've been doing the same, along with my wife, around the house and garden. Today just in time for the cold and snow I finished making some new windows for our cold frame. These are metal windows that I picked up off the street years ago thinking that they might come in handy. But they need a wooden frame to work as tops for the cold frame. I spent the last few days using a Stanley handheld multiplane to dado out grooves in some 2x2s to put the window into. They're not perfect but they look like they should keep the cold out. So my many choi seedlings will I hope be able to grow to a usable state. And my poor little basil seedlings, planted very late as you can guess, may survive long enough to give a bit of basil flavor to November and perhaps December meals.

Between this type of winterizing work, preparing frames and mats for the MRAC show, and getting end of warm weather birding in before it's too late I haven't done much in the way of art. When that happens I often feel like I need to do some sort of doodling, sort of thoughtless art, to warm myself and figure out where I want to go. 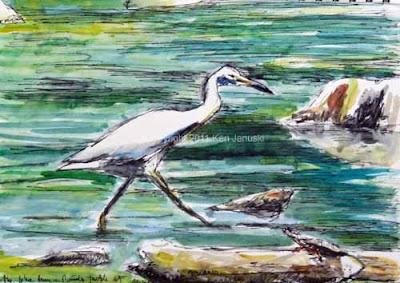 Recently I've done some of that with the runny ball point pen and a Stillman & Birn Gamma sketchbook. But that sketchbook isn't made for strong washes. So I finally broke down and bought a Delta sketchbook with a much heavier paper. I really wanted to try it out. So that's what you see above: the same Bic pen, watercolor and the Delta paper. This shows the immature Little Blue Heron that I saw at Morris Arboretum this summer along with a Painted Turtle, happily looking in the opposite direction as the heron. I've always tempted to do something with it. This seemed like the perfect opportunity to take that composition out for a spin.

I do really like the ability to test out compositions like this. Eventually it or some of the other recent similar experiments should end up as paintings or prints.
Posted by Ken Januski at 5:49 PM

It is 9:25 a.m on Saturday morning and snowing now where I live near Mill Grove in Audubon. The birds, including a family of English sparrows, have collected on the picnic table where I feed them eating furiously. You have captured that species' attitude exactly. The washy look to the sketches is charming. Enjoy the rare October snow, even if the birds do not!

We soon saw our own snow though I doubt we got more than 2 inches here. It sounds like other areas got a true snow storm.

I tried a sketch of the sparrows, and a few juncos, feeding at our backyard feeders but the results leave something to be desired.

The big question is whether or not our 8-10' 'Torch' tithonias lost their flower buds or not. I've been hoping that they'd survive the cold long enough to show their big orange/red blooms. But I have the feeling that the cold and freezing rain probably did them in...........