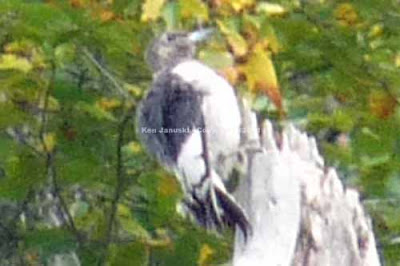 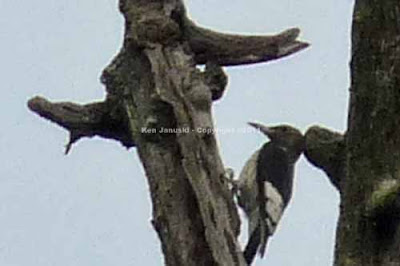 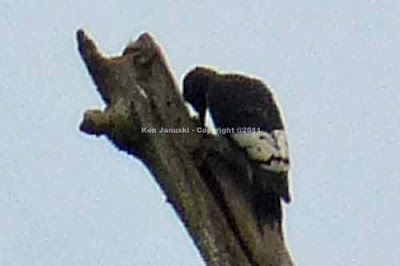 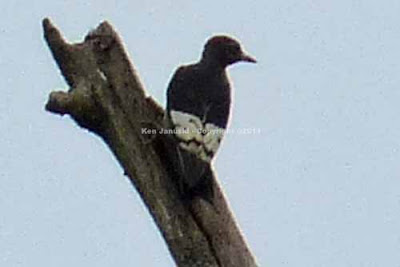 About once or maybe twice a year I break down and post just photos. I make a concerted effort not to use photos but sometimes they seem appropriate. This is one of those times.

My guess is that few people have seen Red-headed Woodpeckers in Philadelphia. They're not uncommon elsewhere, but they are here. So I wanted to go back out and see if the Red-headed was still there and also to photograph it. Mainly I did this in case anyone else wanted to try for the bird.

It took awhile but I did find the bird in the same place, almost directly across from the Gorgas Lane entrance onto Forbidden Drive. I first went across the Wissahickon and stood right under the snag where I'd seen him earlier. I was there for 30 minutes but saw nothing. So I went back across the creek where the snag is clearly visible but much further away. I didn't seem him so moved on and found the mystery bird mentioned further down.

Eventually I made my way back to the 60' snag and there he was. So I spent about 15 minutes taking these photos. They are poor in quality but I think will convince anyone of the ID: juvenile Red-headed. 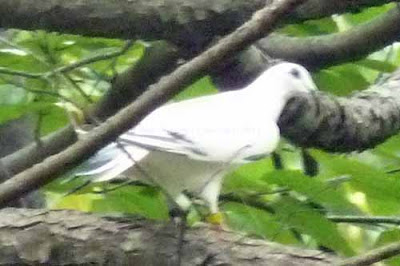 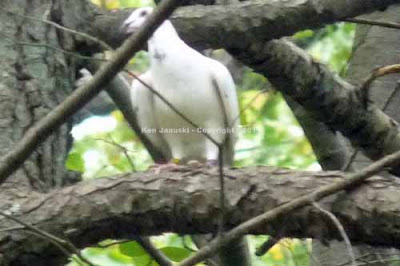 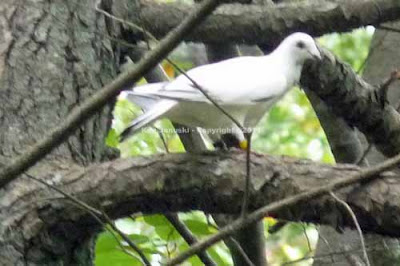 This bird was a real shock because of his blinding whiteness. My first thought was pigeon. But I rarely see them along the Wissahickon, and they never land except at Valley Green. Was it a dove? Didn't really look like it either, though the only one I really know is the Mourning Dove. So I snapped some photos, tried to get closer and scared off.

He moved very quickly like a hawk. But I've also been surprised at how fast pigeons moved. So I assume pigeon. But as I walked back toward the Red-headed I wondered. Could it be a kite? I don't know kites at all and certainly have never seen them this close. The more I thought about it the more I convinced myself that I'd topped the Red-headed with a kite.

When I got home though and pulled out my guides I couldn't convince myself that it was a kite of any sort. If anyone reading this has any opinions let me know. But for now, sad to say, I'm leaving it as a pigeon.
Posted by Ken Januski at 5:09 PM

I would vote for a pigeon. Also, I think it is banded on the right leg with some yellow band.

Thanks Drew. I completely missed that yellow band. If I were more familiar with kites I probably wouldn't have ever considered one. But it just didn't seem like a normal pigeon so my mind started turning horses into zebras.