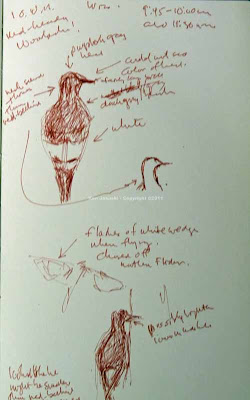 I always have to decide whether or not to bring my camera with me when I'm birding. Since my primary concern is always to see and sketch birds I often don't want the baggage of the camera. But often I'm also taking along a scope and tripod so the added weight of a camera is negligible. Today wasn't one of those days though.

I expected that most of the warblers were now gone, even though we saw 7 Black-throated Blues yesterday and almost 20 Yellow-rumps. If it's the height of migration I'm more likely to bring a camera too since I think I might be able to get some good reference photos.

So no camera today. A half hour into my walk, right past the Gorgas Lane entrance to Forbidden Drive I saw some movement in a 60-80 foot snag across the water. Two birds were chasing one another. Once I got my binoculars on them I found the first to be a Northern Flicker. No surprise. I've seen a lot of them recently. So I figured the second would be as well.

But not when I saw that flash of white on the wings. A Red-headed! I've never seen one in Philadelphia before. Expert birders I've talked to say that they are here very occasionally and almost always immatures.

The light on this one made it hard to see color. The white on wings was obvious but I really couldn't determine head or back color, at least on this first view. But there was no doubt it was a Red-headed.

Over the next two hours I got numerous looks at the bird, some much better than others. Then I could see that the back was dark gray-black and that the head was definitely not the deep, almost maroon red of the mature bird. So this was an immature.

At top are the field sketches I made. Things that struck me were the elegant sleekness of bird. The neck and head looked slimmer than I recall from other times I've seen the bird. Perhaps this was due to it being an immature. Or maybe it was just its pose. I also saw that there were a few black markings on the white section of the wings, something that Sibley notes in his rendering of the immature.

One of the great things about sketching is that you do notice things like this. I don't think I ever previously noticed those markings on an immature. I haven't yet checked my guides to see if the Red-headed is smaller than the Red-bellied. That was my impression though I had nothing to compare it to. I didn't really notice its smaller size when it chased off the Northern Flicker. Other woodpeckers landed in the tree but it seemed to reappear quickly and chase them off. I don't see Red-headeds often enough to have an impression of their character. But based on what I saw today I'd guess that they are agressive.
Posted by Ken Januski at 12:37 PM

Nice find! I never did see a red-headed woodpecker in the 22 years I lived in the Philly area. I saw my first one in South Jersey. Then we went to a national wildlife refuge in Iowa and it seemed like they were on every tree.

I realized they were unusual but since my posting I've heard just how very unusual they are in Philadelphia. And yet as my friend Keith Russell from Pennsylvania Audubon says they were plentiful in the Wissahickon in the 19th century and actually bred there.

How things change. It would be nice to see them make a comeback here. We've never found them plentiful in our travels but have often been places where you could usually find them if you looked. The midwest seems particularly like that.